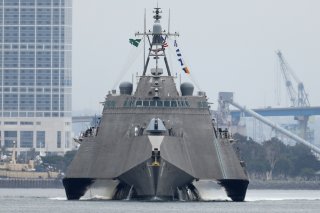 The U.S. Navy’s Littoral Combat Ship (LCS) will soon be firing deck-launched Hellfire missiles as part of the Surface Warfare Mission Package that will be integrated into the ship.

The Hellfire-firing component of the Surface Warfare Mission Package, now integrated onto LCS ships, is an attack system known as the Surface-to-Surface Mission Module (SSMM).  For most of its existence, the SSMM was primarily thought of as a counter-drone, aircraft, and helicopter weapon able to track and destroy air and surface threats in ocean warfare engagements. Not surprisingly, given the multi-domain focus of current Pentagon strategy, Navy weapons developers are now thinking about firing the SSMM’s Hellfires at land targets.

Capt. Gus Weeks, Program Manager for LCS Mission Modules, said that during an upcoming exercise, the service will fire SSMM-launched Hellfires at land targets. Speaking to an audience at the 2022 Surface Navy Association Symposium, Weeks said that the demonstration is “going to be an exercise to determine whether or not we can utilize the SSMM to engage a stationary land target … we’re trying to see if we can employ it a little differently.”

The ship has been engineered and up-gunned to use speed and its shallow draft to access ports, coastal areas, and other high threat regions that are less accessible to deeper draft ships. While initially conceived of as a “littoral” platform, the Navy has recently added lethality to the platform with systems like the Naval Strike Missile, an over-the-horizon, deck-launched offensive strike missile. The concept is to leverage the ship’s capacity for littoral operations, such as counter-mine missions, surveillance, or close-quarters combat, while simultaneously ensuring that the ship can contribute to major maritime warfare operations on the open ocean.

The land attack mission is well suited to the LCS because it can operate close to shore and potentially be in a position to attack high-value land targets. A Hellfire missile is known to operate with a general range of about eight kilometers from a helicopter, which means an LCS could get within a four mile range of a land target.

The SSMM is fundamental to air and surface defense for the Navy because it can destroy enemy aircraft, ships, or small craft with laser spotting and helicopters. Now, the Navy is building upon this to ensure that the weapon can also support land operations. This could be of tremendous consequence in the event of an amphibious attack. For instance, Marines landing on a beachhead could advance with the help of Hellfire attacks from an LCS. This would be extremely significant in an environment where air superiority was not established and enemy long-range guns, air defenses, or troop fortifications would need to be targeted from ships like the LCS. Along with the SSMM, the LCS Surface Warfare Mission Package also includes 30mm guns, a 57mm gun, .50-cal Machine Guns and a defensive interceptor missile called the SeaRAM.