Is the Navy’s MQ-4C Triton Ready for a Great-Power War? 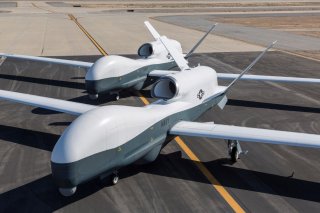 The Navy’s Distributed Maritime Operations (DMO) strategy is, among other things, deeply invested in better arming the entire force for major “blue water” warfare on the open ocean. Some of the earlier applications of DMO emerged as far back as 2015 with the surface Navy’s “distributed lethality” concept to massively upgun and better protect warships in preparation for a potential major force maritime engagement. Weapons and long-range strike, therefore, are clearly fundamental to the “distributed” portions of the Navy’s strategy implementation, given the need to more greatly disperse forces and attack with great precision from longer standoff ranges.

This is part of why the Navy is heavily emphasizing long-endurance drones, manned-unmanned teaming and surveillance assets able to span expansive, extremely vast distances across a dispersed combat area. This is one reason why the Navy and Northrop Grumman continue to upgrade the MQ-4C Triton unmanned aircraft, a large, high altitude, long-endurance drone able to dwell over areas and cover large maritime swaths of ocean on a single mission. As part of this equation, the Navy is working with Northrop Grumman to improve targeting technologies for the MQ-4C Triton to add new depth to its advanced, maritime-specific surveillance systems.

“Triton is engineered to provide persistent, over-the-horizon targeting for the U.S. Navy’s Distributed Maritime Operations doctrine. The aircraft’s ability to remain airborne in excess of twenty-four hours, coupled with its altitude, will allow the Navy to hold targets at risk over a broad area for long range fires engagement to ensure sea control in a contested environment,” Doug Shaffer, the vice president and program manager of Triton programs for Northrop Grumman, told the National Interest.

The increasing mission time for airborne operations in high-risk areas, coupled with great-power threats in Europe or the Pacific region as anticipated by the DMO strategy, certainly heightens the possibility of some kind of mid-air collision with the MQ-4C Triton and an enemy drone, fighter jet or even fixed-wing aircraft of some kind.

Yet another adaptation for great-power war includes the addition of a technological ability to autonomously avoid mid-air collisions using advanced computer algorithms. Northrop Grumman, which makes the MQ-4C Triton, was recently awarded a contract to develop autonomous air collision avoidance. Known as “sense and avoid” technologies, the integrated technical system combines sensors with high-speed computer processing to identify points of imminent collision and, in effect, autonomously redirect the aircraft to avert a mid-air crash. This kind of technology could, it seems, enable the MQ-4C Triton to be more effective in high-end warfare scenarios likely to present new kinds of aerial threats to its operational stability.

For several years now, Northrop has been working with Naval Air Systems Command to prototype SAA systems with a specific intent to, among other things, allow the MQ-4CTriton to safely operate in shared airspace with manned aircraft, a company statement explains. The effort, which includes a developmental partnership between the U.S. Navy and the Australian Royal Air Force, is supported by a larger collaborative coalition, including a joint venture effort between L3Harris and Thales called Aviation Communications & Surveillance Systems.

Manned aircraft such as F-16 fighter jet have, for many years now, been upgraded with a comparable technology called Automatic Ground Collision Avoidance System which similarly uses computer algorithms to take over navigational control of an aircraft in the event that a pilot is incapacitated. This technology, which has now been integrated into the F-35 stealth fighter jet, too, and has already been proven to save pilots lives. It also laid the foundation for ongoing Air Force Research Laboratory work to engineer an analogous technical ability to redirect aircraft in flight headed toward a mid-air-collision, not unlike what is being added to the MQ-4C Triton by Northrop Grumman.