The Navy’s Newest Carrier Is Headed to Patrol the Atlantic 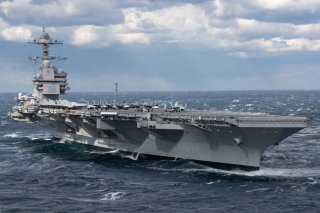 The USS Gerald R. Ford, the U.S. Navy’s newest aircraft carrier and the first of the Gerald R. Ford class, just left on its first deployment from Norfolk, Virginia, en route to joint operations with NATO Allies in the Atlantic Ocean.

“This deployment is an opportunity to further advance the operational capabilities of the Ford and demonstrate the advantages that Ford and Carrier Air Wing (CVW) 8 bring to the future of naval aviation, to the region and to our allies and partners,” said R. Adm. Greg Huffman, commander of Carrier Strike Group (CSG) 12, in the U.S. Navy statement covering the carrier’s deployment.

“Now more than ever, it is increasingly important for the United States Navy to reinforce our relationships with our allies and partners as we contribute to promote a peaceful, stable, and conflict-free Atlantic region,” he continued.

The carrier’s deployment comes at a time of heightened tensions in Europe. The flames of war are still alight in Ukraine, and though Russia is facing increasingly significant losses, the conflict there is far from over. So serious is the threat posed by Russia to European security that Sweden and Finland—both historically non-aligned countries—have applied for NATO membership, a significant reversal of nearly eight decades of official foreign policy.

“We want interoperability, we want interchangeability with our partners. Our NATO partners that are sailing with us – we’re going to work with them every day, every night. That’s what it means to operate on the high seas. Air defense exercises. Long-range maritime strike. We’re going to be doing pretty much every mission set that’s in the portfolio for naval aviation, and we’re excited about that,” he continued.

“This group of individuals have worked so hard to prepare every aspect of the air wing to integrate with Ford’s new technologies and have done so with excellence. It’s also fitting that when USS Nimitz deployed for the first time in 1976, it was CVW-8 who was embarked. Now, in 2022, CVW-8 is again the first air wing to embark on this newest class of aircraft carriers,” Trent added.