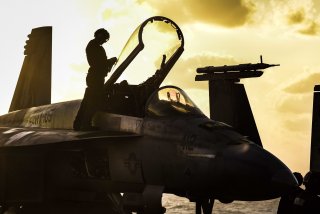 The Navy’s F/A-18 Super Hornet aircraft will fight on for years to come. The first of seventy-eight new Block III Super Hornets arrived at Naval Air Station Patuxent River this week, according to a Navy press statement.

The Block III is a newer, upgraded variant of the Super Hornet, which has served in the Navy and elsewhere for decades. Several upgrades and life extensions have been performed on Super Hornets since the fighter was originally introduced in the early 1980s.

The next group of Block III aircraft will be based at Naval Air Weapons Station China Lake in California, according to the press statement. There they will begin training for operational testing and take part in flights that mimic operational missions.

The Navy has planned for several years to sustain the Super Hornet into the 2040s and beyond. That would allow the Super Hornet to help bridge the gap until larger numbers of the F-35C fighter jets arrived.

The Block III comes with various upgrades that defense contractor Boeing and the Navy have been developing in anticipation of the future threat environment. For example, the Block II F/A-18 variant was first deployed in 2008. It included a refined design intended to reduce its radar signature. This included the addition of conformal fuel tanks blended into the fuselage of the aircraft to extend fuel capacity and create reduce radar signature contours. Aerodynamically configured conformal fuel tanks are engineered to carry up to 3,500 pounds of fuel, according to Boeing’s website.