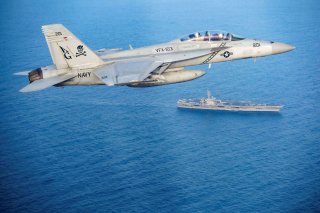 One of the U.S. Navy’s Nimitz-class aircraft carriers recently completed a deployment in what could be the scene of the next big war: the Indo-Pacific.

Nimitz class carriers are not the U.S. Navy’s newest. Nevertheless, they are some of the largest and most advanced aircraft carriers in the world. Particularly in the case of the latest exercises, they are also proving to be the most innovative.

The statement also provided information about the high numbers of sorties the deployment conducted, saying that “during the deployment, Carrier Air Wing (CVW) 9 executed more than 21,307 fixed-wing and helicopter flight hours comprising of 10,250 sorties, 8,437 launches and 8,487 aircraft arrestments.”

“Carrier Air Wing 9 Sailors and Marines worked together over the last seven months, providing a credible deterrent to any potential adversary in the Pacific,” explained Capt. Lew Callaway, the commander of CVW-9.

“Naval aviators culminated 100 years of aircraft carrier aviation history operating 4th and 5th generation aircraft from a Nimitz-class aircraft carrier at sea. We are grateful for the chance to serve, and celebrate our return to home port, family, and friends,” Callaway added.

“Words cannot express just how proud I am of the Sailors and Marines attached to CVW-9,” said MCPO Craig Vavruska, command master chief of CVW-9, in the Navy’s statement. “They expertly applied their training and faced each mission with strength and resilience. Their families have a lot to be proud of,” he added.

CVW-9 participated in a number of important exercises with America’s allies in the Pacific. For example, the Navy explained that the carrier group “participated in dual carrier operations in the South China Sea with the Carl Vinson Carrier Strike, as well as joint exercise Valiant Shield in June 2022, and bilateral exercises Noble Fusion in February and Jungle Warfare in March, both with the Japanese Self-Defense Force, and, most recently, CVW-9 trained alongside 26 participating nations during Exercise Rim of the Pacific (RIMPAC) 2022 in July.”

RIMPAC is one of the most important Indo-Pacific exercises. Primarily a maritime exercise, RIMPAC only takes place every two years. This year’s iteration involved twenty-six nations from all over the Pacific.

The involvement of Pacific nations in RIMPAC has heightened in recent years, though the exercise has taken place almost continuously since the 1970s. With China expressing its interest in expanding claims throughout the region, the exercise will likely gain more prominence in the future.