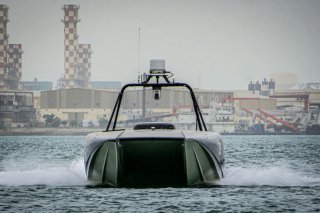 With the U.S. Navy’s Rim of the Pacific exercise underway, America’s sailing service is looking at the future of its manned and unmanned vehicle teaming.

“Whether or not we will buy more MUSVs [Medium Unmanned Surface Vehicles] will be certainly informed by what we’re learning at RIMPAC. When we’ll decide that will be kind of when we’re ready to decide that. And I think even the [Chief of Naval Operations] certainly has even commented on publicly about this discussion about what’s the best path in terms of MUSVs or smaller USVs [Unmanned Surface Vehicles], or those kinds of things, which I believe is a completely healthy conversation,” RADM Casey Moton, the program executive officer for unmanned and small combatants, told reporters earlier this week.

The Navy has not finalized what exactly the MUSV will do nor what its exact mission profile will be. However, the decisions made on the MUSV will help determine what direction the Large Unmanned Surface Vehicle (LUSV) will take.

“We are maturing all of the systems engineering pillars to get to the right level of technical maturity and we will achieve certification—which will include the senior technical authority—looking at that and our key technology areas: has the specific requirements for the land-based testing, for the machinery plant in particular, and other technical areas. So at its most fundamental level, the program office is using this as sort of a piece of its plan to get to those certification points and that transition to LUSV,” Moton added.

The Navy has a total of four unmanned surface vehicles undergoing development and prototyping, platforms that the Navy put through their paces during the RIMPAC exercises.

The Nomad and Ranger, two Large Unmanned Surface Vehicle prototypes developed by the Strategic Capabilities Office, a department of the Pentagon, joined a pair of U.S. Navy ships, as did the Sea Hunter and Seahawk, a pair of smaller unmanned surface ships.

USNI News noted that while it is not the first time that the four test beds have worked with the Navy, this year’s RIMPAC did mark the first time those ships had worked together during the same exercise.

Though each USV worked with just one larger Navy ship, that is not how things will play out in the future. Instead, multiple USVs—potentially of varied size and likely of diverse payloads and mission profiles—will work in tandem with large manned Navy ships, giving those ships a more robust ability to respond to various threats and challenges.