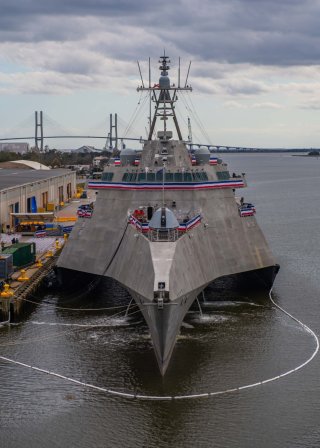 An array of Navy officials gathered in Georgia to celebrate the launch of the U.S. Navy’s newest ship.

“Man our ship and bring her to life!” the ship’s sponsor shouted, giving the USS Savannah her first ceremonial order. Fresh from the christening, the ship is now the newest vessel in service for the Navy.

During the ceremony, Secretary of the Navy Carlos Del Toro explained that “the city of Savannah, Georgia, has played an important role in our nation’s naval history.”

“I have no doubt the Sailors of USS Savannah (LCS 28) will carry on the fighting spirit of this city and will play an important role in the defense of our nation and maritime freedom.”

More specifically, the Littoral Combat Ships are represented by two classes, “armed with capabilities focused on defeating global challenges in the littorals. LCS is designed to provide joint force access in the littorals. LCS can operate independently or in high-threat environments as part of a networked battle force that includes larger, multi-mission surface combatants.”

Though designed to fulfill similar roles, the two classes of ships have wildly different designs. The Independence class, which the Savannah belongs to, is a trimaran design. Rather than a traditional single hull, the ship rides atop three smaller hulls, reducing the ship’s contact with the water and therefore increasing its top speed.

In contrast, the Freedom class appears much more conventional at first blush, though it is anything but. A pair of diesel engines and gas turbines power the ship and allow it to sprint at breakneck speeds over forty-five knots.

It hasn’t been entirely smooth sailing for either of the Littoral Combat Ship classes.

The issue has proven to be a challenging fix. Rather than a simple swap-out, the combining gear’s location deep within the ship’s hull forced the Navy to get creative about how exactly to fix the ship.