The Navy Is Zeroing in on Amphibious Warfare in the Pacific 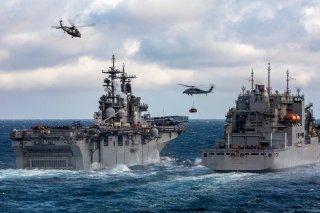 The U.S. Navy’s plan for future amphibious warfare is more expansive and ambitious than it was just eight years ago, something that is likely a result of rapid developments in unmanned systems and networking, as well as the need to prepare for multi-domain warfare in the Pacific.

Years ago, the Navy and Marine Corps talked about a need to operate roughly thirty-three amphibious assault ships (and possibly flex up to thirty-eight). At the time, many felt there was still a sizable unmet combatant commander demand for amphibious vessels, a sentiment that has grown substantially in recent years. Now, there has been the advent of drones, unmanned platforms, and lighter-weight coastal amphibious vessels, such as the Marine Corps Light Amphibious Warship (LAW).

This mix represents an apparently deliberate effort to incorporate a greater mix of lighter, more expeditionary warships like the LAW for “island-hopping” multi-domain maritime warfare scenarios in the Pacific.

The flashpoints for potential conflict are numerous, ranging from Chinese-Japanese disputes over the Senkaku Islands to Chinese pressure on Taiwan to a possible clash in the South China Sea. Should a Marine Corps unit operate with an ability to set up fortified mini bases of sorts from small island areas, it might be positioned to prevail against enemy surface ships and even larger-scale amphibious attacks. For instance, island-based artillery, long-range rockets, or anti-ship missiles could potentially derail a Chinese amphibious assault on Taiwan, by virtue of denying an ability to advance through heavy precision fire.

Given these factors, the LAW would shift the amphibious warfare paradigm away from more linear or traditional kinds of ship-to-shore attacks. Instead, the LAW would support the Navy’s modern Distributed Maritime Operations strategy, which is based upon the tactical premise that newer kinds of sensors, submarines, long-range weapons, and multi-domain connectivity will continue to drive a need for more disaggregated yet networked combat operations. This kind of approach, one that is envisioned for the mission scope of the Corps’ emerging LAW, would call upon and favor the Marines’ multi-domain combat focus. In the case of the Pacific, the Marines would likely want to operate with the ability to conduct land and sea operations in coordination with one another. Pockets of land weapons could be supplied with ammunition, Marines, and even air, surface, and sea-launched drones intended to support maritime warfare operations.