Navy's Amphibious Transport Craft Is Getting Ready for War 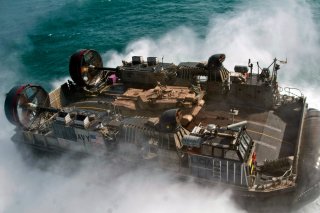 The Ship-to-Shore Connector (SSC), intended to serve alongside and ultimately replace the classic Navy Landing Craft Air Cushion (LCAC), has completed Builders Trials, according to the Naval Sea Systems Command.

The SSCs advance the technical curve in a number of key respects as they include emerging computer technology able to decrease the crew size and introduce new levels of autonomy. They are also built with lighter weight composite materials and can therefore carry more payload from ship-to-shore, including an ability to transport a 74-ton M1 Abrams tank.  The Textron-built SSCs also incorporate automated flight controls and modernized engines, company officials explain. The Navy’s 72 existing LCACs, in service since the 80s, can only transport up to 60-tons, reach speeds of 36-knots and travel ranges up to 200 nautical miles from amphibious vehicles, Navy officials explained.

The new SSC Rolls Royce engines are the same that now power the MV-22 Osprey aircraft and bring more horsepower.

The new SSCs have also moved to a lower frequency for ship electronics, moving from four hundred Hertz down to sixty Hertz in order to better synchronize ship systems with Navy common standards, Textron developers explained. Along with these properties, the new craft reduces the number of gearboxes from eight to two.

The innovations built into the SSC are in large measure intended to adapt to a new threat environment in which heavier vehicles might be needed to deploy more quickly from ship-to-shore to reinforce an amphibious landing.  Armored combat vehicles like M1Abrams tanks typically take a long time to deploy and need to be forward stationed. However, if a heavily armored combat asset such as an Abrams tank can quickly transport from an amphibious ship to support a shore attack, it opens up possibilities for a deeper, longer incursion or amphibious assault upon landing.  This enables a faster, more varied heavy assault, wherein M1 Abrams tanks can support armed amphibious assault vehicles. It also creates a circumstance wherein heavier armor can be more dispersed and therefore less concentrated. The more heavy assets are aggregated together, the more vulnerable they may be to enemy fire, and longer-range sensors and weapons are increasingly enabling more dispersed amphibious attack options.