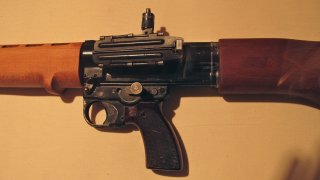 During World War II, Nazi Germany developed some impressive small arms, including the MG42 general-purpose machine gun and the StG44, the world's first assault rifle. However, another notable firearm that is not as well-remembered but was quite innovative—if not perfect – was one that would go on to influence post-war weapon design, notably the American M60 machine gun.

The German Fallschirmjägers were the premiere elite unit of the German armed forces. They played a significant role in the invasions of the Low Countries in the spring of 1940 and took part in the first mass use of airborne troops during the invasion of Crete in May 1941. However, due to the high rate of casualties and the loss of transport aircraft at Crete, Adolf Hitler ordered that the troops be used only as elite infantry.

The Fallschirmjägers were part of the Luftwaffe (Air Force), which had its own procurement plans for weapons. However, at the outbreak of the war the paratroopers were still armed with the standard weapons as the German Heer (Army).

In those early attacks, the paratroopers typically jumped with just a sidearm, while their MP40 submachine guns, K98k rifles and MG34 machine guns were dropped in canisters. When it was determined that the units would fight as infantry, Luftwaffe commanders decided these elite soldiers needed a weapon that could serve as both an individual shoulder rifle and light support machine gun—something that could provide the rate of fire of the MP40 but have the range and accuracy of the K98k along with the suppressing capability of the MG34.

Coming up with such a weapon proved to be no small task, and past gun designers struggled with trying to meet those needs—one notable "close but not quite" example would be the American Browning Automatic Rifle.

The German Army had similar thinking and it developed a new cartridge for its new weapon, and the result was the aforementioned StG44, but the Luftwaffe went another direction and chose to stay with the standard full-sized 7.92mm x 57mm rifle round. The thinking was that this would meet the requirements of providing the range of a rifle and still enable the weapon to act much like a light machine gun.

In early 1942 two companies, Rheinmetall-Borsig and Krieghoff began to develop prototypes of the selective-fire rifle. The Rheinmetall version, which used a long-stroke gas piston, was selected and production began on the Fallschirmjagergewehr 42 (FG42). It was a revolutionary design that featured a steeply canted grip and stamped metal buttstock. However, the bipods proved too fragile while the stock was easily prone to damage. The grip was also considered by users to be uncomfortable and all this made the weapon difficult to control in full auto mode.

About two thousand of the first model or “Type A” versions were produced before the weapon was redesigned by Krieghoff. The so-called second model or “Type B” was heavier and slightly longer—featuring a wooden buttstock and heavier bi-pod. Despite the improvements, the weapon was still too light to be fired in full auto. However, by war’s end about five thousand of the second model were reportedly produced.

Interestingly, and perhaps because two different firms made the weapons, virtually none of the parts from the two models are interchangeable including the twenty-round box magazines.

While expensive to produce, the gas-operated, air-cooled weapon was still innovative for its time. It was designed so that it could fire from a closed bolt in semi-automatic and open bolt in full-automatic, and it featured a magazine that inserted horizontally from the left. It was one of the many “too little, too late” weapons employed by Germany during the war. However, it served as the basis for the American M60 machine gun.

For collectors of modern military firearms it is also considered a “holy grail” and when one was offered by Rock Island Auctions in 2016 it sold for a record $330,000 plus fees!