New Bill Would Allow Australian Sailors to Train With the U.S. Navy 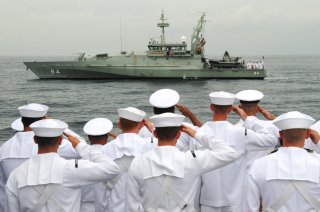 The move would help facilitate important knowledge from the United States Navy to the Royal Australian Navy as the country begins pursuing a nuclear submarine program.

“The AUKUS alliance is the most important national security partnership that America has entered into in decades. Its centerpiece is creating an Australian nuclear-powered undersea fleet of submarines, which all three allies are actively designing. While that work is ongoing, it makes sense to open the U.S. Navy’s nuclear training programs to Australia’s naval officers to acquire proficiency in the operation of nuclear submarines,” said Rep. Joe Courtney, chairman of the House Seapower and Projection Forces Subcommittee.

“The Australia-U.S. Submarine Officer Pipeline Act is a major milestone in the successful implementation of AUKUS. Our bill will authorize an education and training program for Royal Australian Navy submariners to receive formal instruction in the highest standard of U.S. Navy technology, and will begin rotating in the first cohorts of Australian sailors who will command their future fleet of nuclear-powered submarines. This bipartisan bill has the full support of the AUKUS Working Group, and we should waste no time in moving it forward towards a final vote.”

Leaders of the AUKUS alliance, named for Australia, the United Kingdom, and the United States, announced the creation of the group last September. Though Australia exports some nuclear fuel and operates a single nuclear reactor for scientific research purposes, the country does not have a civil or military nuclear program of any significant size.

Sharing the crown jewels of American and British nuclear deterrence, their nuclear submarine technology, came as a big surprise to many observers and underscored the deep mutual trust the three countries have for each other. It also speaks to the importance Canberra, Washington, and London place on the security of the Indo-Pacific — and how they view China’s increasingly revanchist rhetoric and actions.

Building a nuclear submarine program for Australia is anticipated to be a complex and expensive undertaking. In order to jumpstart the process, Australia could first begin training on American or British nuclear submarines or potentially lease older retired American submarines until they are able to field their own indigenous designs.

Once put through the United States Navy’s nuclear submarine program, Australian submariners will be well on their way to an autonomous nuclear naval capability.