New Combat Realities May Spell Doom for the MQ-9 Reaper 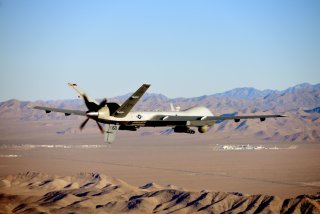 The Reaper was the backbone of American air power during Afghanistan and Iraq, but the MQ-9 would struggle against a dedicated anti-air adversary.

A recent press release from the United States Marine Corps highlighted a new asset and a new capability: refueling an MQ-9 Reaper drone flown by the California Air National Guard, part of a practice called Reaper ACE, or agile combat employment, “which shifts operations from centralized physical infrastructures to a network of smaller, dispersed locations.”

The combat employment emphasizes a decentralized approach to rearming and refueling in recognition that during a future conflict, the United States may not be able to rely on large secure air bases but must rather deal with highly contested environments.

A recent report from the Congressional Research Service, a non-partisan think-tank that informs members of Congress, cited the U.S. Air Force in explaining that “the MQ-9 Reaper is a medium- to high-altitude, long-endurance UAS capable of surveillance, target acquisition, and armed engagement. Although the MQ-9 Reaper borrows from the overall design of the MQ-1 Predator, the MQ-9 Reaper is 13 feet longer with a 16-foot-longer wingspan.

“The MQ-9 Reaper also features a 900- hp turboprop engine, which is significantly more powerful than the MQ-1 Predator’s 115-hp engine.” It added that these upgrades “allow the MQ-9 Reaper to reach a maximum of 50,000 feet altitude, 240 knots airspeed, 24 hours endurance, and 1,400 nautical miles range.”

But, the report explained, there is one feature that most differentiated the MQ-9 from the MQ-1: its ordnance capacity. “While the MQ-1 Predator was able to carry two 100-pound Hellfire missiles, the MQ-9 Reaper can carry as many as 16 Hellfire missiles, equivalent to the payload capacity of the Army’s Apache helicopter, or a mix of 500-pound weapons and Small Diameter Bombs.”

Impressive as those statistics are, the future of the MQ-9 is uncertain. While the platform excelled during the conflicts in Afghanistan and Iraq that defined the United States' involvement in the Middle East, the adversaries the United States fought in those conflicts lacked any opposing air force or robust air defense capacity. The MQ-9 flew virtually unopposed for 20 years.

That may not be the case in the near future against a peer adversary. The two pacing threats that the United States faces today—Russia and China—both have substantial air forces and air defense capabilities, even if, in Russia’s case, their air defense ability has not been particularly successful recently in Ukraine.

This fact leads to the obvious question: if the MQ-9 is unlikely to survive on today’s modern battlefield, not to mention that of the near future, when will the United States retire the platform? The answer is relatively soon. Some have cited Department of Defense material that cites a late-2020 retirement date, though that could be subject to change.

For now, the MQ-9 flies on, though its future is far from certain.