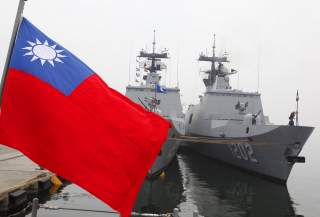 Taiwan has acquired vertical launchers that could enhance the firepower of its warships. But in pouring precious resources into conventional weaponry such as the Mk. 41 vertical-launch system, Taipei is making a big mistake, one expert argued.

Taiwan has received two sets of Mk. 41 launchers from the United States, Up Media reported in January 2019. Taipei has acquired the license locally to produce additional launchers. The National Chung-Shan Institute of Science and Technology is modifying its Hai Kung 3 surface-to-air missile to fit the launchers, according to Up Media.

The Republic of China government plans to integrate the VLS and Hai Kung 3 with the Taiwanese navy's new Hsun Lien naval combat system, which is similar to the U.S. Navy's own Aegis system.

If American and Australian experience is any indication, Taiwan's destroyers each could fit 61 launch cells. The frigates each could fit eight. Paired with VLS, the Hsun Lien combat system could allow the Taiwanese navy to quickly target aircraft and missiles at long range.

But in light of China's overwhelming military advantage over Taiwan, even a major firepower upgrade is a bad investment for the ROC navy, James Holmes, a professor at the U.S. Naval War College, argued at The National Interest.

"During the Cold War, the Taiwanese navy and air force planned to rule the seas and skies adjoining Taiwanese territory," Holmes wrote. "ROC ships and warplanes were fewer in number than those deployed by the lumbering [People's Liberation Army] navy and air force. But they were more technologically sophisticated than their Chinese nemeses, and ROC seamanship and airmanship were better to boot."

"Superior quality—both material and human—offset inferior quantity," Holmes added. "The culture of command of the sea and sky was imprinted on Taiwan’s military culture over the course of many decades of strategic competition with the mainland. That the ROC military worked closely with the U.S. military, a force steeped in command of the common, did little to disabuse ROC warriors of their ingrained assumptions about how to wage combat."

But China's expanding economic, diplomatic and military power changed the balance of power. Today the Chinese navy possesses scores of large warships with their own VLS, while Taiwan is just beginning the process of adding vertical launchers to a few old vessels.

The imbalance was a long time coming. "The notion that a few doughty ROC ships and planes would take to the sea and air and beat back the PLA has been under strain since the 1970s when the United States withdrew formal diplomatic recognition from the Republic of China," Holmes explained.

"No longer could Taipei count on that allied support when the chips were down. The strain intensified during the 1990s when the PLA set out to reinvent itself as a modern high-tech force. As a force more like the ROC and U.S. militaries, in other words."

In a couple of decades, China’s economy has grown to a size 20 times the size of Taiwan’s own economy. All that new wealth has fueled rapid military modernization. "Chinese shipbuilding, aviation technology, and weapons design have made steady inroads for the past 20 years—cutting into Taiwan’s edge in quality while calling into question the conceit that ROC quality will beat PLA quantity."

"In short, the PLA has narrowed if not abolished the Taiwanese military’s technological advantage while also remaining far superior in brute numbers. The islanders may still hold an edge in tactical skill and élan, but, at some point, mainland forces will prevail by weight of numbers amplified by gee-whiz technology."

Rather than pouring resources into a small number of large warships that cannot hope to match China's much greater number of large ships, Taiwan should think small, Holmes argued.

"The Taiwanese navy has begun acquiring small, stealthy patrol craft more suitable for denying the PLA navy access to the waters adjoining Formosa than for fighting a major fleet battle for maritime command. It has armed them with indigenous anti-ship missiles able to give Chinese invaders a bad day. Wonderful!"

"But the navy is only procuring a dozen such craft —hardly a swarm capable of descending on and defeating a PLA invasion force," Holmes pointed out. "Meanwhile, the Taiwanese navy also maintains a legacy force of destroyers, frigates and amphibious warships best suited to fighting major surface engagements and projecting power onto foreign shores."

"The ROC battle fleet is visibly and increasingly out of step with the tactical and operational setting in East Asia," Holmes concluded. "It also consumes resources that could go to the sea-denial fleet."

Adding vertical launch cells to these ships likely won't make much a difference in a fleet-on-fleet battle in which China likely would possess a huge numerical advantage. "Taiwan’s maritime strategy risks falling behind the times,” Holmes warned.