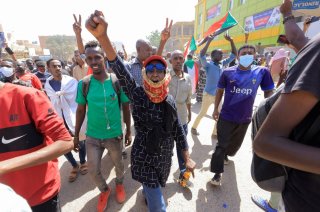 A new wave of demonstrations erupted in several Sudanese cities on Tuesday following the first anniversary of the country’s military coup in October 2021—prompting Sudanese security forces loyal to Gen. Abdul Fattah al-Burhan, the leader of the military junta, to confront the protesters with tear gas, rubber bullets, and stun grenades.

The Sudanese Doctors’ Committee, an opposition group of Sudanese doctors recording casualties from the protests, announced on Wednesday that security forces had killed at least one protester by running him over with a truck. More than 100 Sudanese civilians are thought to have died in anti-military protests since the onset of the coup last year, according to the Associated Press.

Although the protests were centered in Khartoum, Sudan’s capital, separate demonstrations simultaneously took place in Omdurman, the country’s largest city, as well as Port Sudan and other smaller towns. In an attempt to quell the protests, Sudanese officials cut off internet access across the country, hindering demonstrators’ ability to communicate and disseminate information to the outside world, although it was unclear whether these measures had any effect on the course of the demonstrations on Wednesday.

The protests took place amid a series of talks between the military government and Sudanese civil society organizations, loosely organized in the Forces for Freedom and Change (FFC) coalition, on the formation of a new government including representatives from both the military and civilian factions. However, many of the protesters appeared to reject these negotiations, and videos of the protests posted to social media included chants saying, “No negotiations, no dialogue, no partnership”—an apparent reference to previous attempts to form an inclusive government. Some protesters also voiced frustration that the negotiators were discussing an amnesty for Sudan’s two primary military leaders, Burhan and militia leader Mohamed Hamdan “Hemedti” Dagalo, both of whom have been implicated in human rights abuses while in power.

Sudan has been embroiled in a political crisis since early 2019 when longtime dictator Omar al-Bashir was removed from power by army officers following weeks of nationwide protests. In the aftermath of Bashir’s overthrow, the military formed a collective head of state, the Sovereignty Council, with civilian and military representatives. Prior to the coup, the Sovereignty Council had been scheduled to govern the country until a new set of elections established a fully civilian government.