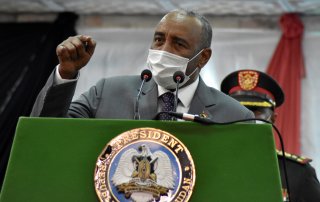 At least five Sudanese civilians were killed on Saturday following a military crackdown on anti-coup protests in Khartoum, according to the Central Committee of Sudanese Doctors, an independent medical association. The group claimed that four of the five had been killed by live ammunition, and one had died after being hit by a tear gas canister.

The crackdown marks a shift in tactics for the government of Gen. Abdel Fattah al-Burhan, the Sudanese military leader who helped to overthrow dictator Omar al-Bashir in 2019 before overthrowing the transitional civilian-led government on October 25, had previously been lauded for his restraint toward protesters. The committee noted that dozens of other protesters had been wounded. It described the day’s events as “excessive repression” and accused the government of “using all forms of force, including live bullets.”

In addition to those killed in the streets, security forces have reportedly entered a hospital in Omdurman, Sudan’s twin city, and detained several wounded citizens. This incident drew the ire of the Red Cross, and Pascal Cuttat, the leader of the organization’s Sudanese branch, insisted that medical help was a right that could not be obstructed by politics.

Sudanese state television insisted that the protests had largely been peaceful but had become unruly and had to be restrained by force. It reported that at least thirty-nine police officers had been injured during the protests and accused protesters of attacking police stations in the capital.

In the weeks following the country’s October coup, tens of thousands of protesters have demonstrated daily in Khartoum, calling for al-Burhan to step down and return power to Abdalla Hamdok, the civilian prime minister he overthrew. Al-Burhan has defended his actions by claiming that Sudan’s previous government was highly unstable (ironically proving his point by overthrowing it). He also claimed that he would continue to implement the country’s democratic transition and would shepherd the country toward its scheduled 2023 elections.

However, the general has already begun to make changes to the leadership, re-appointing the Sovereignty Council that led it in the months following the 2019 revolution but blocking civilian leaders from the “Forces of Freedom and Change” alliance, which has opposed the coup. Burhan, who led the prior Sovereignty Council before dissolving it, also re-appointed Sudanese militia leader Mohamed Hamdan Dagalo, also known as “Hemedti,” as his deputy.

Western countries and Western-based international organizations have opposed the coup, as have regional organizations including the African Union and the Arab League. Surprisingly, Saudi Arabia and the United Arab Emirates, which have close ties to Burhan, issued a joint statement with the United States and the UK condemning the putsch and calling for Hamdok’s return to power.