No ‘Frozen Conflict’: Ukraine Rules Out Ceasefire Until Russian Withdrawal 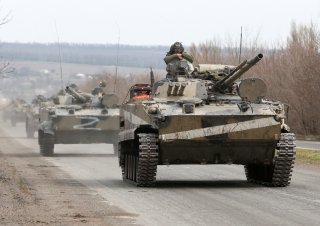 Ukrainian president Volodymyr Zelensky declared on Wednesday that Kyiv could not reach a ceasefire with Russia until Moscow agreed to withdraw its troops from the territory it has occupied in Ukraine, which he described as necessary to avoid a “frozen conflict.”

In his remarks to the Wall Street Journal’s “CEO Council Summit” on Wednesday, Zelensky claimed that Ukraine had prevailed in the first stage of the conflict, when Ukrainian troops successfully defended Kyiv from Russian troops invading from neighboring Belarus. In the second phase, he said, Ukrainian forces would recapture occupied territories in Ukraine’s east, before fully reconsolidating its territorial integrity.

“We will not accept a frozen conflict,” Zelensky said, referencing the situation in Ukraine’s eastern Donbas region prior to Russia’s invasion on February 24. A ceasefire agreement, the Minsk II agreement, was signed in 2015, leading both sides to scale down their military presence on the front lines and withdraw heavy weapons, but the conflict did not end altogether. The Ukrainian leader argued that the failure to resolve the Donbas issue, as well as Russia’s ties with the Donetsk People’s Republic and Luhansk People’s Republic separatist regions, gave Russia cover to launch its full-scale invasion in 2022. He suggested that if Russian troops continued to occupy Ukrainian territory after a ceasefire, the Kremlin would likely install puppet governments in those areas and arrange for them to declare independence from Ukraine—a practice that critics allege has been used in Ukraine, Georgia, and Moldova.

Although ceasefire negotiations are ongoing between Russian and Ukrainian officials, little progress has been made, and Russian leader Vladimir Putin has insisted that Ukraine recognize the independence of the two separatist republics and Russian sovereignty over the Crimean Peninsula, which it seized and annexed in 2014.

Zelensky has refused to agree to either condition. He has also demanded that Putin meet him to negotiate an agreement.

“Until the Russian president signs [a ceasefire] or makes an official statement, I don’t see the point in such agreements,” he said.

Since its expulsion from the areas surrounding Kyiv, Russia has consolidated its forces in eastern Ukraine and increased the pace of its attacks. Ukrainian Defense Ministry spokesman Oleksandr Motuzyanyk announced on Wednesday that Russia had conducted fifty air attacks the previous day, and Russian artillery and airstrikes had continued to target the Azovstal steel plant in Mariupol, the last remaining area of that city not under Russian control. Motuzyanyk claimed that Russia had attempted to storm the plant throughout the week but fighting continued on Wednesday.