No Normalization With Syria, Blinken Says 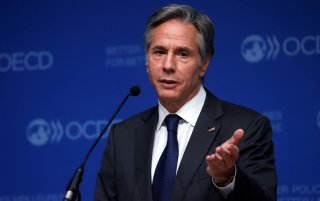 U.S. Secretary of State Antony Blinken said during a news conference on Wednesday that the United States would not support any efforts to normalize Washington’s ties with Syria, or with Syrian President Bashar al-Assad, until the country made substantial progress toward a political solution to the country’s decade-long civil war.

Blinken’s comments come as many Arab nations, regarding Assad’s victory in the war as inevitable, have begun to re-establish ties with the Assad regime. Jordan has reopened its main border crossing with Syria, and Assad spoke with King Abdullah II of Jordan—who is under political pressure after his luxury real estate purchases were revealed in the leaked “Pandora Papers”—by telephone in the first week of October, the first time the two leaders had spoken since the onset of the war.

Additionally, the Egyptian and Syrian foreign ministers met at the United Nations General Assembly session in September, and Syrian and Emirati officials announced on Sunday that they had negotiated plans for future economic cooperation. The United Arab Emirates reopened its embassy in Damascus in 2018, one of the first Arab nations to do so.

While Syria is still suspended from the Arab League, the most important international Arab organization, there have been signs that its return to the group is imminent. Syria was reinstated by Interpol earlier in October, allowing it to request (but not enforce) “red notices” for criminals wanted in Syria but living abroad.

The United States evacuated its embassy in Damascus in 2012 and has not returned since.

While Blinken condemned efforts to “rehabilitate” Assad, claiming that the Biden administration would not lift “a single sanction on Syria or change . . . our position to oppose the reconstruction of Syria,” he noted that Washington had expanded its humanitarian assistance goals in Syria and continued to fight against the remnants of the Islamic State.

Syria’s civil war, which has so far resulted in up to four hundred thousand deaths, once dominated Western media headlines, particularly during the rise of ISIL and the international struggle to contain it. However, although the war remains ongoing in the country’s north, it has been overshadowed by the conflict in Afghanistan, which resulted in the Taliban’s capture of the country in August. As the United States positions itself to withdraw from the Middle East and “pivot” to Asia, the Biden administration has devoted comparatively few resources and little time to the Syrian conflict.