North Korea Carries Out Another Round of Missile Tests 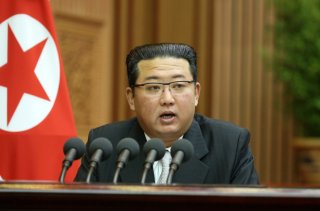 North Korea has fired what appeared to be two short-range ballistic missiles, drawing a new round of condemnation from South Korea and the United States.

The launch, which marks the DPRK’s sixth round of weapons tests this month, came shortly after North Korea fired two suspected cruise missiles on Tuesday from what U.S. State Department officials believe to be an inland area.

“I believe, if we include the two cruise missiles, this is now the most recorded North Korean missile launches in any month ever,” nuclear expert Ankit Panda tweeted. Panda added that the DPRK’s unprecedented spate of tests could be partially intended as a substitute for North Korea’s regular winter training cycle, which may have been downgraded again due to COVID-19 concerns. Panda further speculated that the timing of the tests could be linked to the tenth anniversary of Kim Jong-un’s ascension to power.

South Korean presidential candidate Lee Jae-myung told reporters on Thursday that he expresses “strong regret and condemnation" over the tests, describing them as a “military provocation.” The country’s presidential National Security Council (NSC) convened an emergency meeting on Thursday to address the launches. It is "very regrettable that North Korea's repeated missile launches are contrary to the request of Korea and the international community for peace and stability on the Korean Peninsula and in the region,” the NSC said.

North Korea’s flurry of tests has been accompanied by an upsurge in bellicose rhetoric from the Kim Jong-un regime, with Pyongyang blaming Washington for the deterioration of stability on the Korean Peninsula. “The hostile policy and military threat by the U.S. have reached a danger line that cannot be overlooked anymore despite our sincere efforts for maintaining the general tide for relaxation of tension in the Korean peninsula since the DPRK-U.S. summit in Singapore," North Korean state media stated on Thursday.

The DPRK issued a veiled threat earlier this month to resume its nuclear testing program, with Kim Jong-Un ordering officials to reconsider “trust-building measures” and “promptly examine the issue of restarting all temporarily-suspended activities.” Kim’s statement made an apparent reference to North Korea’s self-imposed moratorium on nuclear testing activity.

A State Department spokesperson said this week that the United States “condemns” North Korea’s missile launches, referring to the tests as a violation of multiple United Nations Security Council resolutions.