Northrop's YF-23: The Best Stealth Fighter (America Passed On It)? 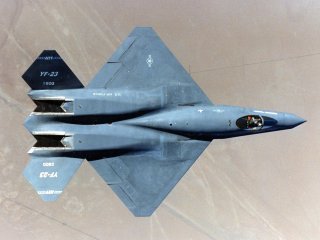 The U.S. Air Force chose the Lockheed Martin F-22 Raptor as its future air-dominance fighter in 1991 following an extensive competition between flying demonstrator prototypes. The Raptor has since come to be viewed as the single most dominant air-to-air fighter in the world, and many lament the Pentagon decision years ago to truncate production of the stealth jet.

But whatever happened to the Northrop Grumman YF-23 offering which competed against the F-22? Could that have actually been superior? Perhaps the question will never fully be answered, as the YF-23 was never formally produced and of course has not entered combat.

However, available information seems to indicate that both the F-22 and the YF-23 presented unique attributes, and multiple reports say the YF-23 was faster and stealthier.  A Defense Daily report from 1991 says the F-22 achieved Mach 1.58 in supercruise and, compared to speeds of Mach 1.8 reportedly achieved in testing by the YF-23.  At the same time, resorts also said the F-22, which does appear smaller and slightly more compact than the YF-23, was more maneuverable and therefore superior in terms of air-to-air warfare and things like dogfighting.

Available renderings of the YF-23 show a larger, more horizontal and stealthier airframe compared to the F-22. The YF-23 was more elongated and flatter than an F-22, with almost a stealth bomber type of wingspan.  Perhaps, at the time of the early 90s, the Pentagon and Air Force sought a highly maneuverable, air-dominance fighter such as the F-22 to prevail in air-to-air engagements against Soviet rivals.

Regardless, the Air Force F-22 fleet size has been massively insufficient, according to many senior service leaders and operational commanders, a scenario which inspired a discussion years ago about possibly restarting production. The F-22 had its combat debut against ISIS in 2014 and has for many years been in demand by combatant commanders in hot spots around the globe. Due to its performance and the overall lack of sufficient numbers of F-22s, the Air Force has continued to massively upgrade the jet with new stealth coating, avionics, sensors and upgraded weapons capability made possible through software upgrades. The F-22 has been given upgraded AIM-120Ds and AIM-9Xs, one of several enhancements intended to sustain the jet into the 2060s and beyond.

However, could the decision not to restart F-22 production years ago have been at least in some measure due to plans and progress with its replacement? The now airborne 6th-generation aircraft was recently confirmed by Air Force Chief of Staff Gen. Charles Brown as essentially being an F-22 replacement. While clearly saying it would be a multi-role fighter, Brown indicated that the aircraft would replace the F-22 and supplement or fly alongside the F-35 for decades.

Brown also seems to be leaving the door open to the idea of two variants of a 6th-generation fighter, perhaps one for Europe and another for the Pacific. Could this present an opportunity for the service to acquire two stealth fighter jets, one with YF-23-like speed and stealth and another with superiority in the realm of aerial maneuvering? Maybe. Perhaps lessons were learned and attributes were noticed with the YF-23 that continue to inform future stealth fighter jet weapons development.