Not All Planes Are F-35s: Meet America's Counterinsurgency Fighter 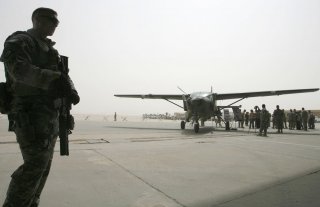 As the U.S. military became more deeply involved in Vietnam in the early 1960s, there arose a need for a counterinsurgency (COIN) aircraft—something that could fly low to the ground and provide armed reconnaissance and even air escort for ground forces. It was a concept that had been pioneered during the colonial wars in Ethiopia and Iraq, but it was during the conflict in Vietnam that the United States began to employ a variety of small aircraft in similar roles.

One of those planes was the T-37A “Tweet” trainer, a twin-engine jet used for training undergraduate pilots, as well as undergraduate navigator and tactical navigator students in the fundaments of aircraft handling and night flying. The U.S. Air Force evaluated two modified T-37 trainers, which were designated YAT-37Ds, to determine how they could fill the role of a COIN attack/reconnaissance aircraft. Dubbed the “Super Tweets,” the two aircraft were tested as part of the Combat Dragon program, where the YAT-37Ds flew in close air support, night interdiction and forward air control missions in South Vietnam and southern Laos.

The Air Force found the T-37 to be just what it needed as it was easy to fly and could operate out of short airstrips. However, the Air Force called for Cessna, the aircraft’s manufacturer, to build an improved version that had greater endurance as well as the ability to carry a much larger payload. The aircraft were fitted with a strengthened airframe that included cockpit armor, more powerful engines and redundant flight controls, as well as provisions for aerial refueling.

The Cessna A-37 Dragonfly as it was then designated was also armed with a General Electric GAU-2B/A 7.62-millimeter “Minigun” Gatling-style machine gun; while it could carry three thousand pounds of bombs, rockets and/or missiles. The aircraft was powered by two General Electric J85 engines, which provided twenty-four hundred pounds of thrust each, which gave the aircraft a cruising speed of 425 miles per hour, while it had a range of 270 miles with full bomb load.

Of 577 A-37Bs that were built, about 254 were provided to the South Vietnamese Air Force (VNAF), which replaced the aging A-1 Skyraiders. The A-37B served with the Air Force for only a limited time in Vietnam, but a number remained in use with the Air Force Reserve and Air National Guard, where it was employed as an observation/flight attack aircraft. The final one in service was only retired in 1992.

South Korea and Thailand also used the Dragonfly, while surplus aircraft were sold throughout Latin American including to El Salvador, which used in the Dragonfly in the Salvadoran Civil War. Other users included Chile, Dominican Republic and Ecuador. The aircraft remains in use with Peru, Guatemala, Honduras, Colombia and Uruguay.

One of the two prototype YAT-37Ds is now on display at the National Museum of the United States Air Force in Dayton, Ohio. What is unique about that particular aircraft is that it is one of only a very few planes to be retired to the museum only to be recalled to active service, when it was needed for final design testing of the A-37 attack aircraft. It was retired a second time and is now on display in the Southeast Asia War Gallery.