Only The Iranian People Can Prevent A Nuclear-Armed Iran 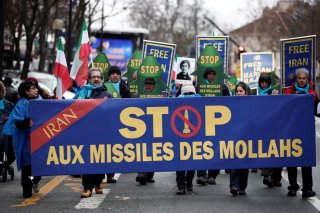 On May 16, the seventieth U.S. secretary of state, Mike Pompeo, met with Maryam Rajavi, president-elect of the Iranian National Council of Resistance, at the Iranian opposition’s headquarters in Albania. While most newsrooms might be too busy or too biased to take notice, there are two major crises running in parallel, and they are the reason why this meeting matters to the world: the internationally disputed Iranian regime’s nuclear dossier and the nationwide uprisings in Iran over multiple socio-economic crises.

As leaders in Western capitals are trying to find a balance between their own domestic challenges and a Russian invasion that is already disrupting world order, Tehran is busy with a nuclear program that no sane mind believes is peacefully designed, let alone intentioned. But in the two decades since September 11, the clerics ruling Iran have deliberately taken steps towards a future where they think they can escape accountability.

Using its Iraqi operative Ahmad Chalabi to drag the United States into war with Iraq in 2003, Tehran removed an arch-foe from its 994-mile-long western border. Iran turned the country into a launchpad to claim hegemony over the entire Middle East. By supporting armed militias on both sides of the ideological divide, it also made sure the blood and treasure that the United States and its allies devoted reinforced the conclusion that Iran is hands-off. Tehran now believes it has successfully taken the war option off the table and that there is nothing to stop it anymore.

However, there was one thing that Ali Khamenei, the regime’s supreme leader, wasn’t counting on. The Iranian people’s organized resistance has the will and dedication to claim their own fate.

No matter which party is in office in Washington, and regardless of Western policy vis-à-vis Tehran, Iranians have taken to the streets, calling “death to the dictator!” whenever they were able to gather, before being gunned down. They have but one enemy: the clerical regime in power.

They chanted, “Reformists, principalists, the game is over!” and “let Syria go and start thinking about us!” The political line of the Iranian people, written in their own blood, has been more than clear to Khamenei and the rest of the world. This is exactly why the supreme leader ended the twenty-four years-old political games of “moderation” and consolidated power in all branches.

Besides the regional saber-rattling and the harsh tone in his rhetoric, Khamenei knows perfectly how much he can count on the Islamic Revolutionary Guard Corps (IRGC) to save his reign on D-Day. Numerous accounts of infiltration and intelligence blunders have depicted his top-secret sites as almost transparent to every major agency. Morale in his armed forces is at an all-time low and fear in Iranian society is waning.

For decades, hundreds of thousands of Iranian families have mourned their loved ones who fell victim to the regime’s oppression or warmongering. A mere 4 percent are living luxurious lives in palaces, on the backs of an entire population suffering under the poverty line. Various types of security or intelligence agencies that are interfering in private affairs have rendered the patience of the people thin.

If history is a guide, the people on the streets have never asked policymakers for their blessing to revolt. Iran is ready for change, and no amount of nukes or appeasement can prevent it. If the leaders in the West want the troubling nuclear threat off the table, there is no better way than to stop dealing with the blackmailers and follow the lead of Secretary Pompeo. He once got the mullahs in his grip, and he’s showing us how to do it again.

Alireza Jafarzadeh (@A_Jafarzadeh) is the deputy director of the Washington office of the National Council of Resistance of Iran and is credited with exposing Iranian nuclear sites in Natanz and Arak in 2002, triggering International Atomic Energy Agency inspections.