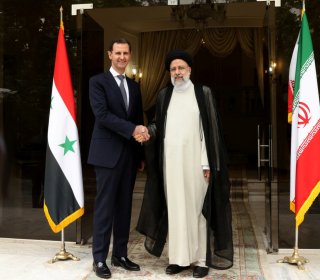 Syrian leader Bashar al-Assad made a rare and unannounced foreign visit over the weekend, traveling to Tehran to meet with Iranian president Ebrahim Raisi and Supreme Leader Ayatollah Ali Khamenei, two of his key allies during Syria’s decade-long civil war.

According to Iranian state-affiliated media, the meeting was a brief one, as Assad departed from Damascus for Iran early on Sunday and returned the same evening.

Ayatollah Khamenei’s website, which featured the news of the visit, claimed that the Iranian supreme leader had told the visiting president that his credibility as a leader had been strengthened by his “victory in an international war.” Although Assad’s position has solidified atop Syria’s south and western regions, the Syrian Civil War has not ended; the country’s northern Idlib province remains under the control of a handful of Islamist opposition groups, Turkish-backed militias have seized Syria’s northern border, and much of Syria’s north and east has been controlled by the de facto independent Kurdistan since the fall of ISIS.

“Today’s Syria is not [the same as] Syria before the war, even though there was no destruction back then,” Khamenei’s website quoted the supreme leader as saying. “But now the respect and credibility of Syria is much more, and all look to it as a power.”

The three leaders also discussed bilateral ties between Iran and Syria, which grew stronger over the past decade as Syria became isolated from much of the rest of the world. Along with Russia, Iran provided key military assistance to Assad’s government, both directly through the deployment of the Revolutionary Guards’ Quds Force to Syria, and indirectly through the deployment of the Tehran-allied Hezbollah militia, based in neighboring Lebanon, within the country.

Sunday’s visit marks Assad’s second trip to Tehran since the outbreak of civil war in Syria in 2011. In early 2019, the Syrian leader traveled to Iran to hold discussions with Khameini on the Syrian Civil War—alongside Maj. Gen. Qassem Soleimani, the commander of the Quds Force who would later be killed in a U.S. drone strike on the Baghdad International Airport by President Donald Trump.

Soleimani’s “martyrdom” was a theme of the visit on Sunday, and the supreme leader compared Syria’s ordeal to Iran’s when it was invaded by neighboring Iraq in 1980. The Iran-Iraq War lasted eight years; Khamenei oversaw much of it as Iran’s president from 1981 to 1989, and as supreme leader after Ayatollah Ruhollah Khomeini’s death in 1989.

Around 400,000 people have been killed in Syria, according to the United Nations, and much of the country’s economy has been destroyed, leading Damascus in search of foreign creditors.