Oops. The U.S. Army Just Screwed Up Another Vehicle Program 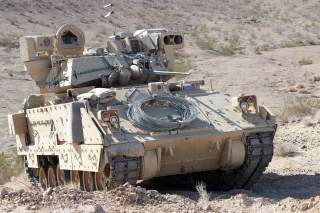 The U.S. Army has walked back its third effort in two decades to replace the aging M-2 Bradley infantry fighting vehicle.

The Army on Jan. 16, 2020 announced it was canceling its current competition to pick a new, semi-robotic fighting vehicle. The service said just one contractor, Michigan-based General Dynamics Land Systems, submitted a bid to the Optionally-Manned Fighting Vehicle effort, rendering the effort non-competitive.

“Today the U.S. Army will cancel the current solicitation,” said Bruce Jette, the Army’s acquisitions chief. “Based on feedback and proposals received from industry, we have determined it is necessary to revisit the requirements, acquisition strategy and schedule moving forward.”

The service plans to revise the vehicle’s requirements and launch a new competition. “The need remains clear,” Jette said. “OMFV is a critical capability for the Army and we will be pressing forward after revision."

The Army in early 2019 began shopping around for a new armored vehicle that could replace some of the branch's thousands of M-2s, which carry infantry squads and support them with gunfire and missiles.

The Bradley’s design dates back to the 1970s. Many of the vehicles currently in service were built in the 1980s and 1990s but have undergone extensive upgrades.

The Optionally-Manned Fighting Vehicle would operate with or without a human crew, allowing commanders to deploy the vehicles on missions that are too risky for human beings.

"The next generation of combat vehicles will close the last tactical mile, giving our soldiers a position of advantage," said Brig. Gen. Ross Coffman, who in 2019 oversaw one of the Army's development teams for robotic vehicles.

"Our combat vehicles will have the ability to transition through those disruption zones with lethality and survivability ... [and] mobility, to be able to fight the enemy on our terms and become victorious."

Two of the unmanned vehicles should fit in one U.S. Air Force C-17 airlifter, the Army stated.

The new vehicles should include only "attainable" technologies, Coffman said. The Army wants to avoid the spiraling costs and repeated delays that have doomed previous efforts to develop new manned and unmanned fighting vehicles.

Most famously, the service's Future Combat Systems -- a network of lightweight, manned and unmanned vehicles -- burned through billions of dollars before then-defense secretary Robert Gates in 2009 canceled it.

Likewise, the Army in 2014 canceled a program to replace the 1980s-vintage M-2 after the new vehicle's design grew too big, heavy and expensive.

The service's March 2019 request for proposals from industry formally began a competition for prototype designs. The Army expected in mid-2020 to choose up to two industry teams to build 14 prototypes. That plan collapsed when only General Dynamics submitted a design.

Officials blamed the failure of the first round of solicitation on the program’s “aggressive” two-year schedule for producing designs.

“Since its inception, the OMFV program has represented an innovative approach to Army acquisition by focusing on delivering an essentially new capability to armored brigade combat teams under a significantly reduced timeline compared to traditional acquisition efforts,” Jette said.

“The Army asked for a great deal of capability on a very aggressive schedule and, despite an unprecedented number of industry days and engagements to include a draft request for proposals over a course of nearly two years, all of which allowed industry to help shape the competition, it is clear a combination of requirements and schedule overwhelmed industry’s ability to respond within the Army’s timeline,” Jette added.

To pay for the robotic vehicle and other new equipment, in its 2020 budget proposal thee Army asked Congress for permission to slow, shrink or cancel hundreds of other programs. The Army's $190-billion budget request, which represents an $8-billion boost compared to the branch's 2019 budget, channels $9 billion into six main development efforts, including new vehicles.