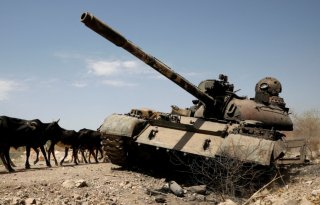 The Oromo Liberation Army (OLA), a separatist rebel group in southern Ethiopia, reportedly killed more than 200 civilians in the village of Tole on Sunday, according to the New York Times. The killing marks a sharp escalation in the ongoing ethnic conflict between the Amhara-dominated government in Addis Ababa and secessionists in the northern Tigray and southern and western Oromia regions.

The attack is regarded as the worst incident of violence within the country since November 2020, when Ethiopian prime minister Abiy Ahmed launched a military campaign in Tigray in order to eliminate the influence of the Tigray People’s Liberation Front (TPLF) separatist group and reduce the province’s de facto autonomy. Despite a wave of early successes, including the capture of the Tigrayan capital Mekelle within a month, the Ethiopian military has seen its gains reversed, and the TPLF now controls nearly all of Tigray and small parts of the neighboring Amhara and Afar regions. At the same time, other Ethiopian separatist groups, most notably the OLA, have risen up elsewhere, complicating the central government’s ability to exert strength in any one area.

The OLA denied committing the massacre. The group’s spokesman, Odaa Tarbii, wrote on Twitter that the killings had been committed by the “Gaachana Sirna” militia, which he claimed had been created by government authorities within the Oromia region to serve as an auxiliary for Ethiopia’s armed forces.

Government-aligned officials in Oromia disagreed, writing that the OLA had “killed people and destroyed property” in Tole because the group could not “withstand the operations launched against it by security forces.”

Ethiopia’s civil war has come about in part due to Abiy’s changes to Ethiopia’s governing structure. The prime minister has overhauled the country’s traditional federal system, in which many decisions were made at the regional level, and attempted to concentrate authority in Addis Ababa, a step that many non-Amhara minorities further from the capital have opposed.

Although the ongoing war in Ethiopia has been stemmed by a unilateral government ceasefire since March, low-level fighting has continued, with negative consequences for Ethiopia’s economy and humanitarian situation.

Abiy announced earlier in June that his government would form a committee to negotiate a peace settlement with the TPLF, a step that would end the most dangerous phase of the civil war if completed. However, outstanding issues between the central government and the rebels, chiefly the issue of authority over West Tigray, have prevented past agreements and could continue to do so in the future.