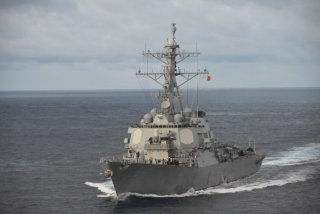 The USS Higgins, a U.S. Navy Arleigh Burke-class guided-missile destroyer, returned to its home base in Japan following a routine deployment.

“Our patrol this year was a great illustration of how much ground 7th Fleet covers and the disparate environments and challenges found throughout the area of operations,” said Cmdr. Joseph McGettigan, the ship’s commanding officer.

“We started back in May operating Northeast of Japan near the Kuril Islands, with fairly cold temperatures, and quickly found ourselves in the heat, crossing the equator south of Guam, a few weeks later. At the end of 6 months of operations, we have travelled all around the South China Sea and back to Japan again. I am very impressed with how well the crew operated as a team and really came together as a family to support each other throughout our time at sea.”

The Higgins also participated in several different maritime exercises in tandem with a number of U.S. allies and partners.

Given the ongoing war in Ukraine, NATO allies are understandably worried about the security of the region. Though neither Europe nor Asia was explicitly mentioned in the Navy press release, the document’s wording makes clear that both Russia and China are a cause for worry.

“Working with other countries strengthened our international relations as a whole,” said Fire Controlman 2nd Class, Stephen Baugh. “Coordinating with members of the Australian and Canadian navies showed us the technological and combatant advancement the U.S. as a whole is always striving to achieve; especially with our Allies.”

Though China and Taiwan were not mentioned, the statement noted that the “Higgins is forward-deployed to the U.S. 7th Fleet area of operations in support of a free and open Indo-Pacific region.”

“U.S. 7th Fleet is the largest numbered fleet in the world, and with the help of 35 other maritime-nation allies and partners, the U.S. Navy has operated in the Indo-Pacific region for more than 70 years, providing credible, ready forces to help preserve peace and prevent conflict.”