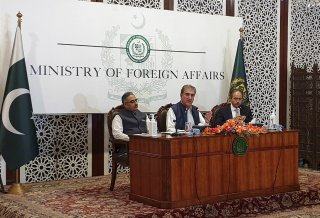 While it was not immediately clear if Qureshi’s visit led to progress on trade negotiations, the foreign minister announced that a Taliban delegation would visit Islamabad, Pakistan’s capital, in future weeks to continue the talks.

Qureshi suggested that his talks with Taliban officials were “detailed,” and had been “attended by the prime minister and almost all cabinet ministers.”

Also present at the negotiations was Faiz Hammed, the leader of Pakistan’s Inter-Services Intelligence (ISI) spy agency, which has long been accused of covertly supporting the Taliban. The two men were joined by Amir Khan Muttaqi, a long-time Taliban leader and the interim government’s current foreign minister.

“We are very hopeful that all our trade issues will be resolved very soon [and that the] borders will open again,” Muttaqi said after the conference ended.

Land travel between Pakistan and Afghanistan has been curtailed by the border crossing’s closure, hurting fruit vendors in southern Afghanistan who primarily sell in market areas in Pakistan.

In recent days, flights from Pakistan into Afghanistan have decreased sharply in numbers after Pakistan International Airlines, the Pakistan government airline that had operated regular flights from Kabul to Islamabad, complained of the Taliban’s stringent entry requirements and harassment.

During the Taliban’s initial period of rule from 1996 until 2001, Pakistan was one of three countries, alongside Saudi Arabia and the United Arab Emirates, to recognize it as the country’s legitimate government. So far, no government has taken that step for the Taliban’s current iteration, although Pakistani Prime Minister Imran Khan has publicly advocated for engagement with the new government.