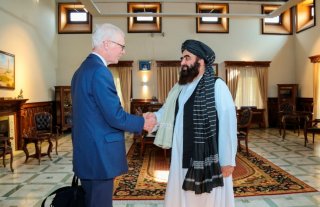 Gass, who was accompanied by Martin Longden, the chargé d’affaires to the UK Mission to Afghanistan in Doha, Qatar, met with Abdul Salam Hanafi, the new government’s Second Deputy Prime Minister, and Abdul Ghani Baradar, the Deputy Prime Minister and the former leader of negotiations between the Taliban and the United States in Doha.

The main issue for discussion was Afghanistan’s impending humanitarian crisis. Prior to the Taliban’s August 2021 capture of Kabul, the country was largely dependent on foreign aid provided by the United States and other Western donors—aid that quickly dried up upon the establishment of the Taliban’s new government, owing to fear that aid dollars could be siphoned off to fund the group. Additionally, although the Taliban seized part of the previous government’s finances during the takeover, most of it left the country prior to their arrival—leaving it holding the bag for the previous government’s debts. Consequently, the new government has experienced difficulty in paying for food and electricity imports, with potentially significant negative consequences in the coming months.

Other topics of conversation included terrorism, which the Taliban government has promised to crack down on to prevent the nation’s territory from being used as a launchpad for foreign attacks; the treatment of women and religious minorities; and ensuring safe passage out of the country for anyone seeking to leave. According to a Foreign Office spokesman, “The government continues to do all it can to ensure safe passage for those who wish to leave, and is committed to supporting the people of Afghanistan.”

The Taliban’s foreign ministry claimed that the meeting also “focused on detailed discussions about reviving diplomatic relations between both countries,” underlining that the group wanted to “begin a new chapter of constructive relations” with the United Kingdom.

A common perception in the West is that the Taliban, which seeks international legitimacy, could be willing to modify its internal behavior to meet with the approval of the rest of the world. By this logic, the Taliban’s ethical treatment of Afghanistan’s women and religious minorities—notably including the Hazaras, a predominantly Shia ethnic group concentrated in central Afghanistan—could result in its international recognition, which no state has so far extended.

However, the British government also pledged in August that it would not recognize the Taliban government unless it included representation for all Afghans, which it does not—complicating London’s efforts at diplomacy.