Pakistani PM Imran Khan: Give the Taliban a Chance 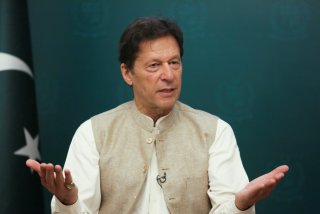 Imran Khan, Pakistan’s prime minister, voiced his support for engaging with the Taliban in a Wednesday interview with CNN. In the interview, Khan’s first to any international outlet since the group’s conquest of Kabul on August 15, the prime minister decried the poor relationship between the United States and Pakistan and indicated that he would be “pragmatic” in his approach to dealing with Afghanistan’s new rulers.

“The Taliban hold all of Afghanistan,” Khan said, “and if they can […] now work towards an inclusive government, get all the factions together, Afghanistan could have peace after 40 years.”

The Taliban have made statements to this effect, proclaiming shortly after the fall of Kabul that they intended to put together an inclusive government and maintain peace. However, the group has since formed its interim government, which contains no women or Hazaras, a significant ethnic and religious minority within Afghanistan that the Taliban treated harshly during its initial period of rule from 1996 until 2001.

Khan appeared deeply concerned about the potential for further instability in Afghanistan, reasoning that it would lead to a further influx of Afghan refugees into Pakistan. To prevent a disaster in the country, he pushed Western donors to resume supplying aid to Kabul, even at the risk of some of it being siphoned off by the Taliban.

Khan highlighted the failure to continue supplying aid during the late 1980s after the Soviet Union withdrew its military presence from the country. Rather than make peace, the mujahideen warlords that had opposed Moscow turned on each other, leading to a period of prolonged violence that only decreased with the rise of the Taliban.

Khan cautioned that the West would be unable to promote women’s rights in Afghanistan without engaging the Taliban or adopting a morally superior attitude. Instead, he suggested that the end of the war would bring dividends for women: “Give them time. They will get their rights.”

The Taliban has publicly announced that women’s rights would be protected—albeit with the restrictions of the Taliban’s interpretation of shari’a law. The spokesmen explained that these restrictions would require women to cover their hair, but not necessarily their faces—although some Taliban officials have mandated facial coverings as well. The new government has also promised that women can continue their education, although it has instituted gender segregation in classes.

Pakistan has been accused of supporting the Taliban during Afghanistan’s twenty-year war – a charge that Khan has repeatedly denied.