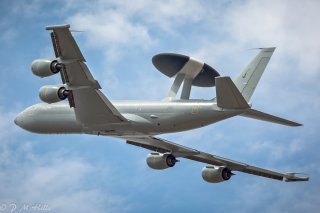 “Based on market research, the Department of the Air Force has decided to replace a portion of the E-3 Sentry Airborne Warning and Control System [AWACS] fleet with the E-7 Wedgetail, which is produced by The Boeing Company.”

“The Boeing E-7 is the only platform capable of meeting the requirements for the Defense Department’s tactical battle management, command and control and moving target indication capabilities within the timeframe needed to replace the aging E-3.”

The president’s budget for fiscal year 2023 suggests that the Air Force divest fifteen of its thirty-one E-3 AWACS air fleet in order to free up funding for acquiring the new E-7. In addition, the budget includes $227 million for research, development, and testing to “support the acquisition of a rapid prototype aircraft planned to deliver in FY27.”

The E-3 is not exactly a young aircraft. The U.S. Air Force first received the airplane in the late 1970s. And while the E-3 has undergone several upgrades during its forty-five years in service, the airplane has since been eclipsed by more modern aircraft and engine designs as well as battlefield management, command, and control technologies.

The airplane can stay on station for up to eight hours without taking on extra fuel. However, flight time can be significantly extended through multiple refuelings and an onboard crew rest area that allows multiple flight crews to operate the aircraft nearly continuously.

The U.S. Air Force’s planned E-7 acquisition is emblematic of the broader ties among America’s English-speaking allies. As the U.S. Air Force release notes, “The E-7 system was developed by Australia for the Australian Defence Forces. The unbreakable U.S. and Australia alliance and interoperability amongst the armed services enabled the Department of the Air Force to leverage this considerable investment and exceptional capability.”

Though the United States and Australia have aligned their interests and cooperated during times of war, the relationship received its most significant boost with the recent AUKUS treaty between Washington, London, and Canberra.

The agreement, which covers nuclear submarine technology development, is considered the crown jewel of the United States and the United Kingdom’s nuclear deterrent. While the importance of the two programs does not achieve parity, the E-7 is nonetheless a significant tactical asset that will aid both the United States and Australia’s command and control capabilities.