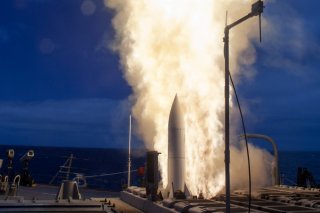 HUNTSVILLE, ALABAMA - The most advanced and highly effective defensive interceptor weapons save lives. They generate major warfare advantages, keeping ships, planes, and armored vehicles functioning amid heavy incoming enemy fire. Yet winning a war cannot only require defense. Forces can thwart enemy attacks to be sure, but winning a major engagement undoubtedly requires going on the offensive with sustained, precise and highly lethal offensive operations to destroy an enemy.

Despite this known reality, the Pentagon’s weapons arsenal could be described as divided too stringently between offense and defense. For instance, the Air Force is building new Intercontinental Ballistic Missiles (ICBMs) for offensive strike or counterattack in the event of nuclear war, while the Missile Defense Agency is fast-tracking its Next-Generation Interceptor to track and destroy approaching enemy ICBMs. The U.S. military services operate large numbers of highly effective, technologically mature, and emerging offensive and defense weapons, so why not explore ways to engineer weapons that do both?  Offense and defense, especially in the realm of missile defense, are deeply intertwined in many respects, a reality prompting Pentagon leaders to make a new push to merge the two when it comes to articulating new warfare strategies.

“We have signed a document that says we need to look at these campaigns today to see how offensive and defensive weapons can work together. The Nuclear Posture Review and Missile Defense Review will be aligned into one National Defense Strategy,” Vice Chairman of the Joint Chiefs of Staff Gen. John Hyten told an audience at the Space and Missile Defense Symposium, in Huntsville, Alabama.

Interestingly, despite the scope, reach, and technological sophistication of many new Pentagon weapons systems, few if any of them can function in both an offensive and defensive capacity. This is something, as Hyten indicated, that the Pentagon seeks to adjust in the realm of concepts of operations, strategic planning, and weapons development. There are only a few kinetic weapons known to have both offensive and defensive operations, such as the Navy’s SM-6 missile. While engineered as a defensive interceptor, the SM-6 has over the years received software upgrades enabling it to launch offensive strikes. This ability, made possible in part through the arrival of the SM-6's dual-mode seeker, was emphasized by the Navy during the development of its now deployed Naval Fire Control Counter Air (NIFC-CA) system. NIFC-CA—which uses an aerial node such as an E-2D Hawkeye early warning aircraft or F-35 stealth fighter jet to find and relay incoming threat data from beyond the horizon to ship commanders—can use an SM-6 as an interceptor to strike down an approaching enemy anti-ship missile at safer distances. At the same time, an SM-6 can also be given targeting data about an otherwise unreachable target beyond the horizon from the aerial node sensor, enabling it to use its own guidance system to attack and destroy a target on an offensive strike.

Could hypersonics be next? Could one of the very few ways of stopping a hypersonic missile need to come from a hypersonic weapon itself? Perhaps interceptors traveling at hypersonic speeds can perform defensive functions? Maybe certain defensive weapons such as Ground-Based Interceptors can be networked with or somehow merged with ICBMs to enable a circumstance wherein the United States could gain a quick advantage in a nuclear exchange by operating interceptors and offensive strike ICBMs simultaneously.