This Is the Pentagon's Plan to Improve Its Missile Threat System 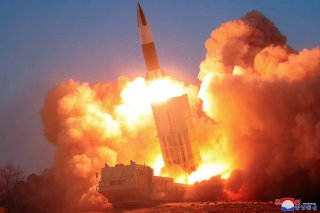 The Air Force and defense industry are taking new technical steps to quickly alert commanders in the event that the United States comes under nuclear attack, by increasing the time window with which decisionmakers have to both defend and potentially retaliate.

This includes using emerging software and hardware technologies and new architecture to, among other things, migrate time-sensitive targeting data to the cloud, increase network resiliency and better connect space, air- and ground-nodes into a fast, seamless integrated threat analysis system.

The current work, which includes new technical methods of engineering communications nodes within a broad network, is part of an overall Pentagon strategy to improve missile warning systems as quickly as new technology emerges.

Part of this effort involves a $197-million deal between the Air Force and Raytheon to advance an emerging system called FORGE (Future Operationally Resilient Ground Enterprise). The Raytheon system helps architect the technical apparatus to gather, store, safeguard and network missile-attack related sensor information. It involves synchronizing fixed ground terminals with other nodes such as air and space assets; it also leverages cloud technology. In effect, when Spaced-Based Infrared sensors (SBIR) detect the heat and light signature of an enemy missile launch, the data is then networked to key ground sites and passed to the appropriate decisionmakers like the president.

“FORGE unlocks data that has been locked up in the past. The value is we are going to support world event challenges in a faster manner. Ultimately, the vision is to break down legacy stovepipes. Right now, stovepipes exist between satellite missions, radars and ground assets,” Karen Casey, the program’s chief engineer, told me earlier this year.

The FORGE initiative does seem to align with an ongoing Missile Defense Agency program described as Command and Control, Battle Management and Communications (C2BMC) System.

“We continuously upgrade and improve our existing systems to make sure the warfighter has the most effective system available to defend the country. We call it spiral development where we put something that is working out into the field and then don’t stop there. We look for the next improvements such as software upgrades,” Mark Wright, the Missile Defense Agency's chief spokesman, told Warrior in an interview last year.

The aim of C2BMC, according to Missile Defense Agency statements, is to “collectively see the battle develop and dynamically manage designated network sensors.”

Wright explained that the strategic and tactical intent, for instance, is to network various space-based, terrestrial and maritime sensor assets to create a coordinated picture of fast-approaching attacks. He mentioned, for example, that this would include connecting ship-based Aegis radar with air assets or ground-based THAAD (Terminal High Altitude Area Defense) missile batteries.

Using cloud technology in this fashion enables otherwise disparate servers and fixed locations to see threat data simultaneously, thus expediting response protocol. An enemy ICBM would typically take about twenty to thirty minutes traveling through space en route to its target, creating time pressure as lives hang in the balance. This approach is consistent with Casey’s description of the FORGE program with the Air Force, which prioritizes both cloud-migration and artificial intelligence.

Some of FORGE, Raytheon developers explained, has been informed by advanced weather information processing systems. Given that FORGE is largely commercial technology, Casey made a point to emphasize that Raytheon continues to take specific technical measures to “cyber harden” the system.