Poland Is Buying U.S. Abrams Tanks to Face Russia On Its Eastern Border 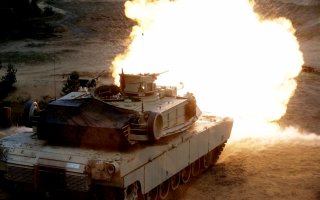 The purchase, bundled with logistics and training packages, as well as ammunitions and upgraded infrastructure to handle the heavy vehicles, reportedly totals a whopping $6 billion dollars (23.3 billion zloty), which will be paid outside of the regular defense budget. The buy comes at the expense of offers to purchase Leopard 2 or K2 Black Panther main battle tanks from Germany and South Korea.

The forty-year-old M1 tank established a superb reputation devastating Iraq’s Soviet-built tanks in the Persian Gulf War and storming the streets of Baghdad in “Thunder Run” operations in 2003, bolstered by its powerful 120-millimeter gun, advanced optical and thermal sights, fifteen hundred horsepower engine, and formidable Chobham composite armor. On the downside, the Abrams is heavy to a bridge-breaking degree, a bit of a gas hog, and has increased in weight as it received modifications to patch over its vulnerabilities in urban warzones.

Defense Minister Mariusz Błaszczak emphasized the Abrams would be deployed to eastern Poland and serve as a “first line of defense’ close to the borders of Ukraine, Belarus, Lithuania, and the fortified Russian exclave of Kaliningrad—all to varying degrees hot spots in Russia-NATO tensions.

The 250 M1s—enough to outfit four battalions with fifty-eight tanks each—will begin arriving in 2022 and enter service with the 18th Mechanized Division, in particular its sub-units the 1st Warsaw Armored Brigade based at Wesoła and the 19th Mechanized Brigade at Lublin. As those units count only three tank battalions between them, that leaves one more battalion set to be assigned.

The Polish Army’s adoption of the M1 tank will doubtlessly be aided by the presence of a rotating U.S. armored brigade combat team in Poland, which could transfer useful expertise on operating the new type.

Today, Poland essentially serves as NATO’s armored bulwark. Its inventory of around seven to eight hundred tanks in thirteen battalions roughly equals the combined main battle tank fleets of France, Germany and the United Kingdom. That makes sense because while the United States and West European states would struggle to rapidly move heavy tanks to a distant battlefront, Poland would likely be at or adjacent to the frontline in a conflict with Russia, particularly at the Suwalki Gap, the only NATO land bridge to the Baltics.

The Abrams purchase means the Polish Army will soon operate tanks from four different countries. As of 2019, the Polish Army’s inventory consisted of nearly 250 modern German Leopard 2A4 and 2A5 tanks, 257 to 380 Soviet-era T-72 tanks (counts vary), and over 230 PT-91 Twardy tanks, a Polish-built variant of the T-72M1 with enhanced sensors and fire control.

The M1s will replace the oldest variants of the T-72 and PT-91, though more heavily modernized variants of both will likely endure for years to come. Poland’s defense industry is separately working to upgrade older tanks to modernized Leopard 2PL and T-72M1R standards.

Unlike Poland’s T-72 style tanks, the Abram’s superior armor, firepower and sensors allow it to individually overmatch Russia’s lighter forty-five- to fifty-ton T-72B3 and T-90A tanks in a head-to-head clash, especially at longer range. That doesn’t guarantee victory given the many other factors affecting combat, but it’s still a significant edge.

Błaszczak  also characterized the new SEP V3 tanks as “…constructed to counter the most modern Russian T-14 Armata tanks.” Indeed, Russia is (very slowly) bringing Armatas into service featuring multi-layered defensive systems, an unmanned turret and an improved main gun. The T-14 might prove a worthy adversary for the Abrams out to medium range, but only once it and its advanced ammunition enters service in larger numbers.

However, relations between Germany and Poland have suffered due to the authoritarian policies of the ruling Law and Justice Party, and Berlin’s commitment to the Nord Stream 2 pipeline in cooperation with Russia. Meanwhile, Warsaw’s relationship with the United States warmed under the Trump administration, which sympathized ideologically with the ruling party, and was eager to sell weapons like F-35 stealth jets, Patriot air defense missiles and HIMARs artillery systems to Warsaw. (That said, it’s unclear whether that will change much under the Biden administration.)

Polish defense expert Krzysztof Kuska wrote to me late last year “If Poland decides to go for Abrams it will be a political decision. Nothing more. The benefits for the [Polish] economy compared to doing a venture with Korea and Italy-Spain will be minimal… I think that the M1 is a bit heavy for Poland when fully equipped. It gets muddy here and those tiny rivers all over the place can be a pain.  Besides that, there are the fuel concerns - it would have to require a whole new [supply] chain incorporated into the existing one, not to mention the [new] repair and logistics chain, etc.”

It’s also unclear whether Poland’s M1s will come with the depleted uranium (DU) armor inserts enabling U.S. tanks to achieve very high degrees of protection. The U.S. sold downgraded export models to clients in the Middle East and Asia-Pacific, but it may be more open to furnishing DU armor to a NATO ally. For what it’s worth, Poland’s government claims it is receiving “stock” M1A2 SEPV3s.

There is also so far no indication the Polish Abrams will receive Trophy active-protection systems currently being fitted to U.S. M1s, particularly those deployed to Poland. Successfully combat-tested by Israel, Trophy could provide protection from both long-range anti-tank guided missiles and short-range rockets that have caused the lion’s share of tank losses in recent wars in the Middle East.

Another missing puzzle piece is the extent the agreement negotiated by Warsaw covers future upgrades in the M1 development pipeline, such as a third-generation infrared sensor (FLIR), or whether those will need to be paid for separately.

In the end, though, the characteristics of the M1 matter less to combat effectiveness than how well the tanks’ capabilities are integrated into a broader, adequately modernized combined-arms apparatus.

As Kuska wrote to me recently: “If I had to decide between having 250 top-notch tanks or having 0, I’ll go for the 250. The question is: will Poland have the intel and a layered air/rocket defense to guard those tanks from above [ie. aerial and artillery threats]? They claim that there will be further strengthening of the armed forces but there are no details.”