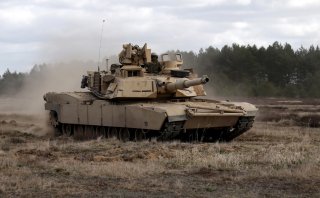 Russian president Vladimir Putin has demanded that NATO return to its 1997 status and remove many of the former Warsaw Pact nations that joined the alliance in recent decades. While it isn't likely that Putin would mount an invasion of his Eastern European neighbors yet, there is little denying that he'd like to see many of them back in Moscow's sphere of influence. However, the Polish government is now doing everything it can to ensure that never happens.

It was announced last week that Warsaw is pushing forward with a plan to purchase $6 billion of military hardware and equipment from the United States. That move comes as Russia continues to mass troops on its border with Ukraine. "Some of those forces [are] within 200 miles of the Polish border," U.S. secretary of defense Lloyd Austin noted during a press conference Friday.

"This proposed sale will support the foreign policy and national security of the United States by helping to improve the security of a NATO Ally that is a force for political stability and economic progress in Europe," the Defense Security Cooperation Agency announced in a release. "The proposed sale will improve Poland's capability to meet current and future threats by providing a credible force that is capable of deterring adversaries and participating in NATO operations. Poland will have no difficulty absorbing this equipment into its armed forces."

Warsaw has been engaged in a sweeping military modernization effort. In 2019, Warsaw inked a $6.5 billion deal to buy thirty-two F-35 fighters, and subsequent agreements have been made for Poland to purchase mobile rocket artillery systems from the United States.

Many U.S. lawmakers have also shown their support for Poland in the face of Russia’s aggression and posturing.

Lawmakers have been even more vocal in their support this month.

"It is critical that the United States do all we can to reinforce NATO's Eastern Front as Russia's threats to further invade Ukraine grow more troubling by the day," Rep. Mike Rogers (R-Ala.), the ranking member on the House Armed Services Committee, said in a statement on Friday. "I'm glad to see that these tanks will finally be going to Poland to aide in the defense of NATO."

If Putin was hoping that his saber-rattling would make NATO cave to his demands, his plan has failed spectacularly. Instead of the United States and NATO scaling back their commitment in Eastern Europe, additional forces have been deployed to the region. U.S. paratroopers and F-15 fighters arrived in Poland earlier this month, and Warsaw has only ramped up its military modernization efforts.