The Russian Threat Is Behind Poland's F-35 Purchase 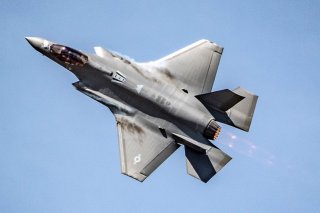 The current Russian threat to Ukraine leaves little question as to why Poland is moving quickly to stand up its own fleet of F-35s by 2024. With its own F-35s, Poland will have the reach and combat radius necessary to defend the Polish border and even provide support in the skies over Ukraine.

Poland shares a large border with Ukraine, so it only makes sense that the country wants to shore up its own forces in light of Russia’s military buildup on the Ukrainian border.

Poland borders the Baltic states and could even form an F-35 “web” with Finland now that it has ordered its own F-35s. European countries with F-35s would certainly present a formidable deterrent to any Russian incursion. If Russia faced a “web” of European F-35s, it would struggle to secure the skies in support of any large ground assault. With this in mind, it is entirely possible that a strong, visible F-35 presence in Poland could effectively deter a Russian invasion of the Baltics. Finnish-Polish F-35 collaboration, which could by itself potentially thwart a large-scale Russian military invasion, only adds to the deterrent effect of Poland’s F-35s.

As its borders are within striking distance of Russia’s 5th-generation Su-57s and medium-range ballistic missiles, Poland likely seeks F-35s for defensive purposes as well. Depending on the range and resolution of the targeting sensors built into the Russian Su-57, Polish F-35s might be positioned to identify and destroy approaching Russian aircraft before they are detected by Russian pilots. That possibility is a key reason why the F-35 is so powerful. With its superior computing and targeting technology, a single F-35 could likely destroy a large number of enemy fighters.

However, as Poland’s existing fleet of Soviet-era fighters could very easily be overwhelmed by Russia’s 5th-generation aircraft, Poland would remain vulnerable without F-35 fighters. If the Baltics fell to Russian control quickly, which many experts believe is possible, Poland would be the next likely destination for advancing Russian ground forces. Without the F-35, Poland would be in jeopardy of being overrun quickly unless NATO massed a large ground force to repel a Russian advance. However, even if Russia did operate with a numerical overmatch on the ground, decisive air superiority could compensate for a smaller, less capable Polish ground force. That is exactly why Poland is rushing to acquire its own F-35 fighters.