Police Crack Down On Unrest In Tunisia 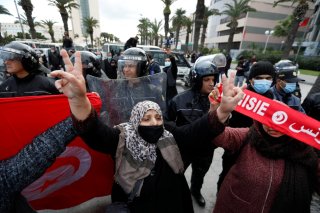 Police in Tunisia used water cannons and tear gas to disperse protesters in central Tunis, the nation’s capital, who had gathered on Friday to pressure President Kais Saied to return the country’s dissolved parliament to power.

The demonstrators had reportedly intended to gather on Habib Bourguiba Avenue, the capital’s main street and the location of other notable demonstrations in Tunisia’s history. Tunisian police, however, obstructed the protesters’ path, forcing them to retreat. Two water cannons were reportedly deployed outside the interior ministry on the same street, according to Al Jazeera.

The country’s opposition parties, which abruptly lost their legislative seats after Saied unilaterally and unconstitutionally suspended the parliament, have described the president’s actions as a coup d’etat. Opposition leaders have played a major role in organizing and directing the protests with the ultimate aim of pressuring Saied to return the country to parliamentary rule.

Saied has ruled through executive authority since July. A former constitutional law professor, Saied proposed changes to the country’s constitution that would have to be approved via a nationwide referendum.

Saied has denied that the events of July constituted a coup. His claims that a majority of Tunisians support his actions appear to be confirmed by independent polls.

The protesters defied Tunisia’s strict COVID-19 laws, which ban all indoor and outdoor gatherings, in order to hold their march. Ennahda, the Tunisian branch of the Muslim Brotherhood and the country’s largest opposition party, issued a statement describing the ban as an attempt to stifle protests and help Saied consolidate control.

Friday marked the eleventh anniversary of President Ben Ali’s resignation and exile, a date now celebrated as a national holiday within Tunisia. However, Saied has proposed moving the holiday to December 17 to mark Tunisian street vendor Mohamed Bouazizi’s self-immolation in protest of corruption by the country’s security forces. Bouazizi’s death in 2011 triggered a wave of protests against Ben Ali. Tunisia’s protests set off similar protests throughout the Arab world, leading to the earth-shattering consequences of the Arab Spring.

Some observers suggested that the timing of the demonstration indicated that the protesters do not approve of Saied’s rescheduling of the holiday.

Since Saied’s assumption of executive power, press freedom has come under attack, and a number of politicians and businessmen have faced criminal charges that their supporters claim are politically motivated.