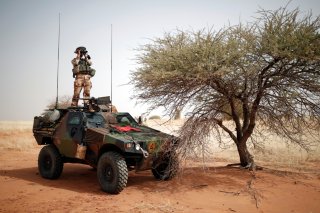 Thousands of Chadian protesters demonstrated against the presence of French troops in the West African Sahel state over the weekend and on Monday—a series of protests that were ultimately only dispersed after the country’s security forces launched tear gas and broke them up through force.

Security in N’Djamena, Chad’s capital, was increased on Monday morning, with larger contingents of police patrolling the main streets. In the preceding days, Chadians had chanted anti-French slogans and set fire to a handful of gas stations owned and operated by French energy giant Total, which conducts extensive business in the former French colonial possession. Protesters also attempted to reach the presidential palace but were beaten back by the police, according to AFP.

In February, French president Emmanuel Macron announced that Paris would withdraw its troops from Mali, the origin of the region’s Islamist insurgency, after a pair of coups in 2020 and 2021 brought a military junta to power. As relations between the French government and the Malian junta deteriorated, the military government called on Russian mercenaries to supplant the French military presence, prompting Macron to leave altogether. However, French troops continue to serve in other Sahel countries, including Niger, Burkina Faso, and Chad.

France has long enjoyed close ties with the Chadian government. Idriss Deby, Chad’s president from 1990 until his death during a battle against the country’s northern rebels in April 2021, enjoyed particularly close ties with French leaders, who subsidized his government and provided generous military assistance. In 2008, when Deby’s government came close to collapse after a rebel offensive, the French army intervened to drive the rebels back into neighboring Sudan.

After Deby’s death, his son, Mahamat Idriss Deby, took over as the country’s leader, even though the Chadian constitution specified that the head of the parliament should receive the position instead. France’s endorsement of the younger Deby likely impacted his ability to maintain control.

Although these moves aimed to ensure stability in a highly volatile region, they also antagonized many opposition movements, including the Wakit Tamma citizens’ union, which helped plan the weekend’s protests.