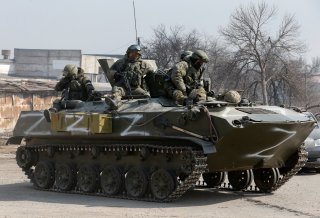 In his first televised address since the Russian military’s retreat from northern Ukraine last week, Russian leader Vladimir Putin promised that the country would achieve its “noble” war aims in spite of its early missteps and the repositioning of forces.

Putin attempted to justify the Russian invasion—described as a “special military operation” rather than a war by Russian state media—by arguing that Moscow had a responsibility to protect ethnic Russians in Ukraine’s east and secure its border from an increasingly Western-oriented government in Kyiv. He acknowledged that the war had led to tragedy, although he denied reports that Russian forces were responsible for war crimes in Ukraine, describing the atrocities against Ukrainian civilians in the cities of Bucha and Kramatorsk as “fake.”

“Our task is to fulfill and achieve all the goals set, minimizing losses. And we will act rhythmically, calmly, according to the plan originally proposed by the General Staff,” Putin declared in his remarks. He characterized Russia’s goals in the war as “absolutely clear and noble,” and added that there was “no doubt” that they would be achieved.

“Our actions in certain regions of Ukraine were … related to containing [enemy] forces, destroying military infrastructure, [and] creating conditions for a more active operation in Donbass,” he said, in reference to Ukraine’s eastern Donbass region, where two pro-Russian separatist regions have fought alongside the Russian army throughout the conflict.

Putin added that Western sanctions had failed to disrupt the Russian economy, noting that the Russian ruble had quickly returned to its pre-war value after an initial disruption.

Although Putin regularly appeared on Russian media during the first days of the conflict, his appearances sharply declined after logistical and morale problems became evident among Russian troops. In the days following the Russian withdrawal from northern Ukraine, he appeared at the funeral of Vladimir Zhirinovsky, a prominent far-right Russian legislator, but did not discuss the war in his remarks. Putin also met with Austrian chancellor Karl Nehammer on Monday, but no photos of the meeting were released.

The Russian leader’s address came during a visit to the Vostochny Cosmodrome, a new spaceport in Russia’s far eastern Amur Oblast, to commemorate the sixty-first anniversary of the inaugural flight of Soviet cosmonaut Yuri Gagarin, the first human in space. The cosmodrome used in Gagarin’s flight is now located in Kazakhstan, a former Soviet republic.