Putin Is Smiling: 40 Ships to Join the Russian Navy This Year 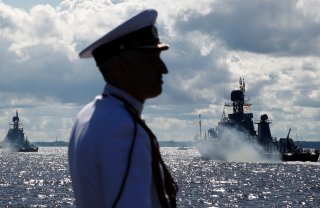 Much has been made in recent months about the exponential growth of China’s People’s Liberation Army Navy (PLAN), which currently consists of between 313 and 342 warships—compared to the U.S. Navy’s 285 warships. China has undertaken a bold strategy to double the size of its destroyer force, and to even have global navy dominance in the coming decades.

However, the PLAN doesn't present the only potential threat to the United States Navy.

This weekend, Russian president Vladimir Putin announced that the Russian Navy will be bolstered by the addition of some forty new ships this year, with a focus made on equipping those vessels with hypersonic strike missiles.

“This year, forty ships and vessels of various classes will be put into service with [the Navy],” Putin said during remarks made on Sunday’s Main Navy Parade in St. Petersburg according to Russian state media. “Unique advantages and improving the Fleet’s combat capabilities will be achieved due to broad introduction of advanced digital technologies, the world’s unparalleled hypersonic strike systems, unmanned underwater vehicles and due to the most effective self-defense means.”

Putin further noted that less than two weeks ago the Russian Navy laid down six new vessels at three leading Russian shipyards, and highlighted the fact that those new vessels will be equipped with high-precision arms, and will also include strategic underwater cruisers and multirole submarines.

Two of the multipurpose amphibious assault ships are being laid down at the Zaliv Shipyard in Kerch, and each will displace twenty-five thousand tons and will have a length of about 220 meters. While still significantly smaller than U.S. Navy aircraft carriers or even the America-class amphibious assault ships (LHA), the Russian vessels will be capable of carrying more than twenty heavy helicopters and will have the ability to transport up to nine hundred Russian marines.

In addition to the naval efforts, the Russian military has undertaken an effort to develop advanced jets and other aircraft.

Putin thanked the organizers and participants of Sunday’s event.

“I would like to thank you, the defense ministry’s top officials, the Navy command for the preparation for and holding of the Main Naval Parade in St. Petersburg and naval parades in other cities,” Putin was also quoted by Tass.

He has said the idea for the event came while he was on a plane reading about the history of pre-Russian Revolution events.

“I came across an article about the Main Naval Parade organized in pre-revolution Russia, in Kronshtadt. I call you right from the plane,” he added. “And after that, preparations began for a Main Naval Parade in St. Petersburg and other port cities. Indeed, it is becoming, it would be right to say, it has become a very good tradition, a big holiday not only for the navy men but also for the entire country.”

The Main Naval Parade was held in Kronshtadt on Sunday, which was attended by a limited number of spectators due to sanitary and epidemiological restrictions. The festive events on the occasion of Russia’s Navy Day featured vessels of the Northern, Baltic, Black Sea, Pacific Fleets and Caspian flotilla. The naval parades on Sunday involved 15,000 people, 219 vessels of various classes, 71 aircraft and 126 pieces of combat vehicles.