Is Qatar the Next F-35 Customer? Not if Israel Has its Way. 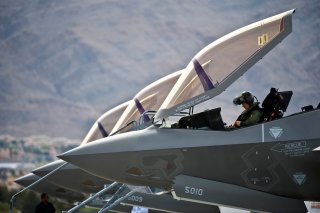 The sale of Lockheed Martin F-35 Lightning II Joint Strike Fighters to the United Arab Emirates (UAE) isn’t a done deal just yet, but even if it goes through it is unlikely Israel will agree to support a similar sale to Qatar.

There are plenty of reasons why Qatar would likely want the F-35, but also plenty of reasons why it likely won’t ever actually obtain the stealth aircraft. The Gulf State, and neighbor of the UAE, has formally requested acquiring the advanced aircraft to complement its current fleet of Alpha Jets, Mirage 2000s, Dassault Rafales, F-15E Strike Eagles, and Eurofighter Typhoons. Adding the F-35 would allow it to phase out some of the older aircraft.

However, the relationship between Qatar and the UAE is far from good, and while the two nations share a naval border and are both Gulf Cooperation Council (GCC) members, diplomatic relations were severed in June 2017 following the Qatar diplomatic crisis. Saudi Arabia, Bahrain, and Egypt have also severed ties with Qatar due to the latter’s support of Hamas and its links to Iran.

For its part, Qatar certainly wouldn’t want to be “outgunned” in the sky should the UAE actually obtain the F-35 aircraft.

A bigger sticking point for Jerusalem however is that Qatar has made it clear that it would not normalize relations with Israel until a two-state solution is reached. Qatar also remains committed to the Arab Peace Initiative, the Saudi-backed proposal from 2002 that would see full diplomatic ties with Israel established across the entire Muslim world in exchange for the establishment of a Palestinian state based on the 1967 borders.

For Israel, there are other sticking points. In addition to Qatar’s support for Hamas, Jerusalem is wary of how Qatar has become a close partner with Turkey and backed Ankara during the 2017 crisis with its Gulf neighbors. Both nations support the Muslim Brotherhood, while Turkey has increased its support of Islamist nationalists including those in Libya. Such zeal isn’t in Israel’s best interests.

Then there are the U.S. considerations.

In addition to hosting the U.S. military presence, Qatar also hosts a large Turkish military base. It is unlikely that the United States would want Turkey—which was expelled from the F-35 program for its acquisition of the Russian-built S-400 Triumf missile defense system—anywhere near the F-35 jets.

While it is unlikely that Qatar Emiri Air Force (QEAF) will receive the F-35, it will still get a powerful new aircraft platform in the form of the F-15 Qatar Advanced (F-15QA), the latest upgrade to a time-tested platform and it incorporates twenty-first-century technology.

The QEAF will be acquiring thirty-six of the new F-15QA fighters, which will be delivered beginning next year in a contract worth $6.2 billion.

Even if the Gulf States of the UAE and Qatar don’t ever receive the F-35, it is likely those aircraft can already be seen over the Persian Gulf as Qatar is home to the al-Udeid Air Base, where the United States Air Force maintains a significant operational presence. In August, just a month after the B-1B Lancer bombers completed their deployment, the Air Force deployed the F-35A to the base for the first. And that might be as close as anyone from the Qatar military gets to the F-35 for now.