Race Against the Clock: Can the Ukraine Grain Deal Avert Famine? 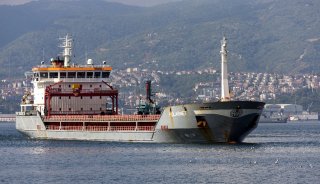 Russian, Ukrainian, Turkish, and United Nations officials agreed on Monday to codify a set of transit procedures allowing ships to enter and exit the Ukrainian ports of Odesa, Chernomorsk, and Pivdennyi/Yuzhny along the Black Sea without risk of attack from Russia.

Frederick Kenney, the UN's coordinator at the Joint Coordination Center in Istanbul, said that the new procedures would allow for a “big uptick in applications for transit” into and out of Ukraine’s ports. Kenney added that the UN’s goal was to transport two to five million tons of grain from Ukraine each month, which he added was “achievable” given the new procedures and the large number of ships now willing to embark on the trip through the Black Sea.

Since the Russia-Ukraine agreement regarding grain exports went into effect in late July, twelve ships have left carrying Ukrainian corn and sunflower oil as cargo. Another four have received approval to travel into port, while roughly a dozen have remained docked in the port since the onset of the Russian invasion, which made the Black Sea impossible to transit. Kenney observed that dozens of other ships were waiting in Turkey while their owners negotiated transport contracts with the Ukrainian government.

The UN official added that 370,000 tons of grain and other foodstuffs left Ukraine within one week of the agreement’s entry into force, a number higher than the UN had initially projected.

As part of the agreement, Russian naval forces agreed to respect a 10-mile “protection strip” on either side of the main export shipping lane. Russian forces must inspect all incoming and outgoing ships to ensure they are not used for military purposes, such as smuggling additional weapons into Ukraine.

Although the UN stressed during the negotiations that ships exporting grain from Ukraine would do so for commercial rather than humanitarian reasons, it observed that the end goal of the Russia-Ukraine talks was to help prevent a global food crisis caused by decreases in grain supplies from both countries. Tens of millions of people are thought to have been pushed toward hunger by the conflict, the overwhelming majority in Africa.

“We’re going to be doing a comprehensive review of procedures early next week to see what needs to be tweaked and improved,” Kenney said. He added that Ukraine’s short-term objective was to clear additional loading piers for service, increasing the rate at which ships could enter and exit the three ports.