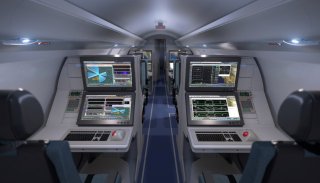 Finding enemy armored convoys on the backside of a mountain beyond the line of sight, supporting ballistic missile defense operations, tracking enemy targets from the sky with optical, multi-spectral, and radio frequency sensors, and networking time-sensitive combat data across multiple domains in near real-time amid war . . . are all missions United States, UK, and NATO fixed-wing surveillance assets will increasingly be expected to perform.

Despite the rapid arrival of smaller kinds of surveillance drones and new kinds of unmanned systems, there is still a pressing need for a new generation of innovations supporting advanced fixed-wing intelligence, surveillance and reconnaissance with advanced aerial data processing, transmission, and command and control.

With this strategic focus in mind, various industry innovators such as Raytheon and Bombardier are introducing a new high-tech, fixed-wing surveillance plane, called ISTAR, for Intelligence, Surveillance, Target Acquisition and Reconnaissance.

The new aircraft, built by Bombardier, designed and modified by Raytheon for the ISTAR mission, with support and modification in-country by Korean Airlines Defense, is being offered to support the Korean military as well as other key U.S. allies around the globe.

Raytheon is offering it as the next generation special mission aircraft offering following the retirement of the British Sentinel aircraft on March 31, a Cold War inspired UK surveillance plane which has performed well in a large number of operational circumstances throughout a period of many years, to include the Balkans, Iraq, Afghanistan, Libya and various NATO operations.

“The Sentinel has been a core capability that’s been deployed pretty much in every single UK operation, or coalition operation, whether UK has been involved in and that’s simple, flying from the UK, but more often, the platform is deep being deployed overseas, whether it be to the Middle Eastern Region, or to Africa, or supporting operations in Afghanistan,” Paul Francis, the director at Raytheon United Kingdom, said.  “It has a robust flying hours profile. I think it’s like 32,000 hours in actual operations in supporting combat operations.”

Designed for airborne command and control, ISTAR is the latest proposed solution that incorporates a suite of integrated next-generation sensors enabled by advanced computing. The airplane of course operates multi-spectral imagery, signals intelligence sensors and also incorporates Synthetic Aperture Radar (SAR), a technology which bounces electromagnetic “pings” off of the terrain below traveling at the speed of light and then analyzes the return signal to produce a rendering or image of a given area for commanders.

“The core of the system is Raytheon’s AESA radar, which is a synthetic aperture radar, with a moving target indicated capability. And that was the primary sensor on the Sentinel,” Jason Colosky, a business development executive at Raytheon Intelligence & Space, said.

The ISTAR aircraft is also supported and Inverse Synthetic Aperture Radar (ISAR), and Moving Target Indication (MTI) which operates in a similar fashion making it useful in a maritime environment to track moving ships or detect enemy ground vehicle maneuvers on land. Land movement tracking is also done by ISTAR’s ground-moving target indicator (GMTI) sensor technology, something which Raytheon data says integrates with the SAR applications. The connection between GMTI and SAR modes is made possible by an Advanced Active Electronically Scanned Array Radar system which can even in some instances support ballistic missile defense.

This combined or integrated effect between land and maritime SAR detection is explained in part in a 2019 essay in the Journal of Ocean Engineering and Science, which discusses the impact of variation innovations upon SAR functionality in maritime environments. The essay,

“High resolution SAR is able to provide images of the two dimensional information objects. A good radar image depends upon a smooth variation in phase history over the data-gathering interval. The high resolution and large spatial coverage of SAR imaging systems offers a unique opportunity to derive the various oceanic features.  SAR systems take an advantage of the long-range propagation characteristics of radar signals and the complex information processing capability of modern digital electronics to provide high-resolution imagery,” the press statement states. ISTAR, which can operate at altitudes between 42,000 and 45,000 foot for extended twelve-hour missions, also operates multi-spectral long-range imagery to provide both visible and infrared intelligence and targeting.

Interestingly, ISTAR developers make the point that larger, fixed-wing surveillance platforms, while less stealthy, can still massively impact the speed and operational effectiveness in major power maneuver warfare, due to their ability to provide targeting at long stand-off distances.

While of course still useful for counterinsurgency and counterterrorism operations, challenges which are not going away entirely, large ISR planes such as ISTAR can prove even more impactful in a major conflict against a sophisticated adversary . . . provided operators make some key tactical adjustments.

“For the past 15 years, if you had a good radar system, you could keep the ground commander fully up to speed with what’s happening. It wasn’t that the enemy was weak, but the enemy certainly wasn’t complex. This is not the same as what we;re going to face in a peer, adversary type of conflict,” Colosky said.

The concept is, among many things, airborne command and control driven by an integrated suite of sensor and computing technologies architected to pool multiple types of intelligence or multi-INT. ISTAR processes and analyzes that intelligence to offer a near real-time operational picture to war commanders. While there may need to be dispersed, long-range networking, manned-unmanned teaming, advanced computing and high-speed electro-optical and RF data link networking, a medium sized surveillance plane with a small on-board crew performing analytics and command and control is intended to bring certain kinds of unparalleled advantages to high-end warfare.

“It is definitely a stair step progression in technology and the complexity because the adversaries we’re facing now are going to be far more complex in what they can do, so this Is how we are addressing the threat,” Colosky said.

ISTAR is larger than the U.S. Army’s Enhanced Medium Altitude Reconnaissance and Surveillance System (EMARSS) yet smaller than the now retiring JSTARS, something which developers believe may offer an optimal blend of airborne command and control with speed, maneuverability and a wide sphere of interconnected sensors. The strategy may be to blend the unique benefits of a manned airborne command and control asset with cutting-edge or more recent strategic concepts such as real-time, dispersed multi-node “mesh” networking to maximize operational reach while massively expediting high-speed sensor-to-shooter connectivity.