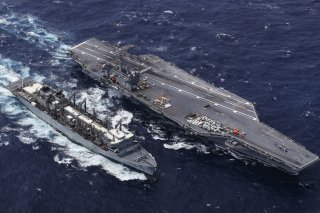 The People's Liberation Army Navy (PLAN) understands the need for ports around the world, just as the British Empire's Royal Navy understood the need two centuries ago. China can't truly be a global superpower without such ports, which could enable the PLAN to operate great distances away from its native shores. This is why the PLAN has expanded its first overseas military base in the African nation of Djibouti on the Red Sea.

China's bold "One Belt, One Road" global infrastructure program calls for a string of military facilities including a naval presence in far off locations such as in the Maldives and Tanzania.

At the same time, China also understands that if it came to war with the United States and its allies, crippling the U.S. Navy wouldn't mean direct attacks at the Carrier Strike Groups (CSG). While aircraft carriers would make tempting targets, the PLAN might very well target the logistical support.

"I will share an exchange I had with a Chinese admiral during the time when I was on active duty," explained Roughhead, who was the chief of naval operations from late 2007 until his retirement in 2011. "He made it very clear to me that our logistics ships were a primary target, because if he can take out logistics, he takes out the lifeblood of the fighting ships, if you will."

Business Insider reported, as the United States military moves away from its focus on the Middle East, it has been reorienting for "great-power competition" with Russia and China. As a result its ability to sustain military operations in a conflict especially in the Pacific has gotten renewed attention.

Last month a Congressional Research Service Report highlighted the challenge that the U.S. Navy is facing in its ability to achieve and maintain wartime control of blue-water ocean areas of the Western Pacific. The report noted that there are several issues that Congress must take action on, including whether the U.S. Navy is responding appropriately to China’s naval modernization efforts and even if the planned size of the Navy will be appropriate to counter China, while also permitting the Navy to perform other missions, including countering Russian military forces and defending U.S. interests in the Middle East.

Roughhead noted that the distances are much greater compared to what the military has been used to over the past two decades, while the U.S. and its allies have been able to operate in the Middle East with "logistics impunity."

With this shift to that great-power competition, the U.S. military will have to rethink that the role of logistics and that will include dealing with supplies. Moreover, China – much like Japan during the Second World War – has increased its reach and can strike American targets that are currently a crucial part of the U.S. Navy's supply chain.

Bryan Clark, senior fellow at the Hudson Institute, issued a statement to the House Armed Services Subcommittee to address the future force structure.

"The Navy will need a new fleet design to sustainably address its challenges and exploit its opportunities. Unfortunately, the Navy's current plans fail to deliver on these goals," Clark wrote. "By continuing to emphasize large multimission combatant ships, the force structure reflected in the PB 2020 Shipbuilding Plan and FY 2021 budget includes too few ships to distribute the fleet or create sufficient complexity to slow or confuse an enemy's attacks."

Clark also suggested that the Navy expand its logistics forces with a new class of vessels that can enable a more distributed sustainment concept and increase the resilience of deployed naval formations.

Clark singled out a lack of tanks as a major national-security concern. Perhaps private industry can pick up the slack. Just as the United States Air Force has announced that it is now considering private contractors to help refuel its bombers and fighters – while it has also addressed that some of its new aerial tankers aren't up to the task – so too the Navy may have to look at contractors to help increase its strategic sealift capabilities.