Remington 597 Rifle: Proved Tried and True for a Reason 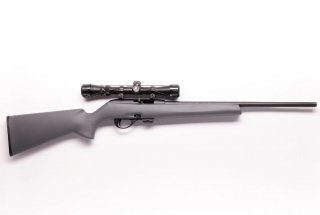 The Remington 597 is a gun you’ve seen before. Remington has served American firearm customers since 1816 and has offered the 597 since 1997. It’s still in production to this day, and for a good reason. If you don’t know it already, read on to find out why this rifle, chambered in .22LR, is still a viable option for many gun owners.

Grouping-wise, you can’t go wrong with the 597. At twenty-five yards, target practice can get you 1-inch spreads and many of the rifles come with scopes, given how long they’ve been in production. If you don’t like traditional scopes, you can even fit a reflex or red dot sight on the top. I’ve had my 597 for a while now and it still shoots as it did when I got it. The accuracy proves to be even better than its counterpart, the Ruger 10/22, which is saying something.

All 597s currently in production feature aluminum magazines, which helps a tremendous amount in keeping the gun stable. A drawback on the reliability side is that the ammo being shot is .22LR; notoriously cheap ammo that will dirty your gun up. It’ll need to be cleaned every 200 rounds if you want to keep it from misfiring. Taking apart the 597 to clean is easy enough, but it’ll come apart in a bunch of small pieces, so don’t expect to be field stripping it; this is strictly a home activity. You’ll need a screwdriver and a wrench for certain.

The gun is a semi-auto, not a bolt-action, as most .22s are. What this means for the reliability side is that, while the gun fires faster, the increase in colliding parts means it gets messy quickly.

As far as handling goes, the 597 is like a dream. It’s lightweight at only 5.5 pounds and the composite stock makes it easy to aim. It is a gun that is stable, comfortable, and fun to fire all around. Bigger game will need a bigger rifle, but the 597 is perfect to bring for hunting small varmints that pop up.

A good trigger goes a long way, but the trigger for the 597 is heavy at 5 lbs. of pressure needed. Surprisingly enough, this does little to hamper the accuracy of the rifle. You can find the safety on the trigger guard, making it easy to thumb into place. The trigger guard itself provides plenty of space for you to run your finger through as well.

You can get two types of magazines for the 597, amounting to a ten-rounder or a thirty-rounder. The aluminum magazines allow for a quicker reload than the typical bolt-action you get with .22s, which means you can snag more than one rodent at a time. However, in terms of self-defense, a .22 rifle won’t lend you any hands, so you might want to look elsewhere. If you’d still rather have a rifle for self-defense, I’d check this list of the 5 best rifles for home defense.

The Remington 597 sits at 5.5 lbs., considerably light for a rifle. The total length is forty inches, a slick black twenty-inch barrel finishing it off at the end. The barrel is long, as you’d expect for a gun of this type, and can be fitted with a suppressor to make the already quiet shot almost silent. The weight makes it easy to grab, go, and aim, necessary for late-night varmint visitors.

There’s not much recoil to worry about with the 597, taking into consideration the cartridge. Still, the stock and the weight of the gun protects from further recoil, just to add on to the accuracy of the 597.

This is a solid, all-around shooter that just works. It’s accurate, it feels good to shoot, and it’s quick. Sure, taking it apart is a chore and it dirties up quick, but a well maintained 597 will last you for years. If you want something more geared towards range shooting, I might suggest an alternative.

It’s not a gun that will rock your world or change your view, but it does what it does well and it has for years. If you want a snappy alternative to other .22 semi-auto rifles, then the Remington 597 is a solid choice.