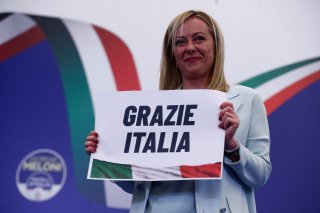 Giorgia Meloni, the leader of Italy’s right-wing Brothers of Italy party, declared victory in the country’s latest parliamentary election on Sunday night after exit polls appeared to give her prospective coalition a decisive lead.

Although the Brothers of Italy is loosely descended from the Italian Social Movement, a neo-fascist party formed in postwar Italy, Meloni and its other leaders have downplayed these connections and sought to normalize the party within Italy’s existing political establishment. In her victory speech, Meloni called for unity and pledged that she would govern responsibly: “If we are called to govern this nation … we will do it for all Italians, and we will do it with the aim of uniting the people.”

In the run-up to the election, Meloni had also softened her party’s rhetoric on several key issues, including Italy’s continued membership in the European Union (EU) and other international organizations. She described Rome’s relationship with Brussels as “particularly complex,” but emphasized in her remarks that her administration would continue to work with it and NATO. In the weeks leading up to the election, she emphasized the need to continue to supply arms to Ukraine—a stance that could put her at odds with Salvini and Berlusconi, both of whom have praised Russian leader Vladimir Putin and expressed skepticism toward the West’s sanctions regime against the Kremlin.

Although the results have not yet been finalized, current projections suggest that the Brothers of Italy will win roughly twenty-five percent of the vote. Its closest challenger, the center-left Democratic Party, is expected to receive nineteen percent of the vote while both Forza Italia and the League are projected to receive far smaller shares. Although more votes appear to have been cast for parties outside of Meloni’s electoral alliance, she and the other parties benefit from a law that provides a greater share of parliament seats to parties that pre-register their electoral coalitions, which the Democratic Party failed to do.

The election’s turnout is projected at sixty-four percent, by far the lowest turnout in the country’s recent history.