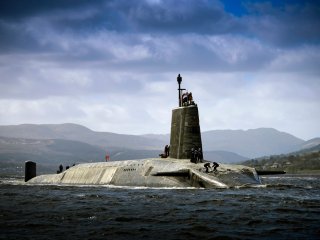 A submarine is probably never a good place to contain the spread of an infectious illness, but in the case of COVID-19, it is hard to think of anyplace worse short of a space ship! While the U.S. Navy took great strides to stop the spread of coronavirus on its submarines and destroyers, earlier this week it was reported that more than thirty crewmembers of the Royal Navy’s ballistic-missile submarine HMS Vigilant (S30) tested positive for the novel coronavirus after the sub made a port visit to the U.S. Navy’s East Coast SSBN hub in Georgia.

According to a U.S. official who spoke to USNI News, this outbreak could have been avoided.

In fact, it was the result of the crew ignoring important isolation rules that were intended to prevent such an outbreak from occurring in the first place. While the sailors serving on the £3 billion submarine were ordered not to leave the quarters at the Kings Bay Navy Base, at least a dozen totally disregarded those rules and headed off to bars, restaurants, and of course strip clubs—with at least a few traveling to Florida, which along with Georgia also happens to be among the states hardest hit by the global pandemic.

Some of those sailors reportedly traveled as far as Cocoa Beach, nearly a 400-mile round trip journey from the base, for a night on the town! The wild escapades occurred despite the command staff insisting that overnight leave was denied during the maintenance work of the submarine’s Trident II D5 weapons platform.

An Officer But No Gentleman!

Then again there is the fact that it appeared to be a failure from nearly the top down.

The Daily Mail newspaper reported that Lieutenant Commander Len Louw, a weapons engineering officer in charge of the nuclear missiles, reported drunk and with a bucket of barbecue chicken in town when he finally turned up for his shift on the submarine. Louw has been relieved of his duties, and has since been flown back to the submarine’s home base in Faslane, Scotland. A full investigation is now pending.

The bad behavior has resulted in far more than colorful press for the Royal Navy. It could leave the submarine seriously compromised.

As of this week, at least thirty-five crew tested positive for the coronavirus and that included the submarine’s doctor and worryingly the executive officer (XO)—who is one of the only two people with codes to actually fire the nuclear weapons that are onboard. This is especially notable as the Vigilant is one of only four Vanguard-class ballistic submarines armed with Trident missiles that are tasked with maintaining the UK’s nuclear deterrence force.

The crew of the submarine most certainly has not honored the name Vigilant in any way, but this is sadly not the first time members of the crew have reportedly violated important rules on the submarine. In 2017, some sailors were found to have violated liberty rules and tested positive for drugs when the boat was also in port at Navy Submarine Base Kings Bay.

Additionally, a prior captain and fellow officer were also relieved of duty for having sex with female officers onboard the submarine. The prior scandals even earned the boat the nickname “HMS Sex and Cocaine“ in the British press.

This current outbreak, which resulted from the crew acting like they were on a booze cruise rather than serving on a nuclear submarine, didn’t occur due to the “special relationship“ that exists between the UK and the United States In fact, NCIS has determined that no U.S. sailors or base personnel were involved in the crew’s activities. However, it is still unclear if any U.S. personnel were exposed to Royal Navy sailors that may have been infected with the coronavirus.