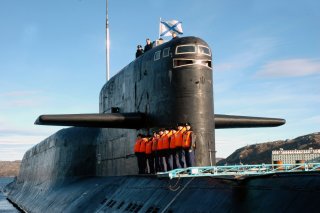 Russia’s submarine industry has big plans for the remaining months of 2021.

The CEO of Sevmash—Russia’s largest shipbuilding company—Mikhail Budnichenko told the state news outlet TASS that the Belgorod special-purpose submarine will complete sea trials by the end of this year. One of the largest submarines in existence, the K-329 Belgorod is a hulking, bespoke underwater vessel constructed from the hull of a modified Oscar II model. The submarine is designed for two different roles. It can house mini-submarines that are, in turn, capable of fulfilling a wide range of covert and specialized missions that can include everything from sabotage to intelligence gathering. But the Belgorod’s value as a mothership for mini-submarines was diminished somewhat in 2019 when the AS-21 Losharik—a spy submarine that the Belgorod was designed to carry—suffered an onboard fire that led to the deaths of fourteen seamen and reportedly put the submarine out of commission until at least 2025.

However, the Belgorod has been given a new lease on life in a radically different role: the special-purpose submarine will be the first to support Russia’s upcoming Status-6 Oceanic Multipurpose System “Poseidon” unmanned underwater vehicle. One of the six new weapons unveiled by Russian president Vladimir Putin in 2018, Poseidon is a nuclear-powered underwater drone armed with a 1-2 megaton nuclear-capable payload. The drone is meant to detonate its payload thousands of feet below the surface, generating a radioactive tsunami capable of contaminating everything within a large blast radius. Russian experts have suggested that Poseidon can be used as both a strategic and tactical weapon; that is, they believe it can not only potentially destroy U.S. coastal cities but also hold North Atlantic Treaty Organization (NATO) carrier strike groups (CSGs) at risk.

The Belgorod can reportedly accommodate as many as six Poseidon units. The development status of Poseidon remains unclear—according to a prior U.S. intelligence assessment, the ambitious new weapon is expected to enter service no earlier than 2027. Moscow has no plans to reproduce the Belgorod, a one-of-a-kind vessel built under unique circumstances. Instead, the Kremlin plans to procure a new line of modernized submarines—the Khabarovsk-class, or Project 09851—that are built from the ground up to carry Poseidon systems. The Russian Navy is reportedly on track to deploy thirty-two Poseidon drones across four submarines.

In addition to the testing progress being made on Belgorod, Budnichenko noted that the Project 955A Borei-class nuclear-powered ballistic missile submarine (SSBN) Knyaz Oleg and project 885M Yasen-class nuclear-powered cruise missile submarine Novosibirsk will also complete their sea trials by the end of the year. “These ships must go to sea several more times for factory and state trials. As of today, all operations on the submarines are within schedule. The ships perform well and confirm their specifications,” he said. Knyaz Oleg and Novosibirsk are the fifth and third submarines of their respective classes; both vessels are scheduled to be handed over to Russia’s Pacific Fleet by the end of 2021. Budnichenko added that two other Borei submarines—Dmitry Donskoy and the Knyaz Potyomkin, the last two planned units in the Borei line—were laid down in August, making 2021 one of the Russian shipbuilding industry’s busiest years in recent decades.