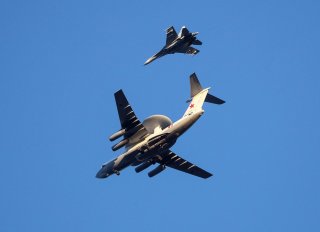 The airplane, dubbed the A-100 Premier, is based on the Russian Il-76MD-90A airframe. The A-100 mounts a large radar antenna faring atop the fuselage, similar to airborne radar aircraft in American or NATO fleets.

TASS, the Russian state-owned news agency, reported on the flight and explained that the A-100 “radio-technical equipment features technical solutions based on advanced components, high-performance computers and the latest domestic radio-electronics achievements.”

According to TASS, the flight was a success.

“During the test flight, specialists checked the aircraft’s aerodynamic properties and the performance of avionics and some special devices of the onboard radio-technical equipment,” the report says.

Rostec, a Russian state-owned defense conglomerate, said that the airplane’s “systems operated in compliance with the designated parameters and are ready for further tests.”

"The flight proceeded in the normal mode,” said Sergey Parkhayev, Crew Commander and Test Pilot of the Beriev Aircraft Company. “All the systems and equipment operated smoothly. The crew accomplished the flight assignment in full, checking the aircraft’s stable and controlled operation in the designated modes of piloting and the performance of the equipment mounted on the airplane. The Il-76MD-90A platform confirmed its designed characteristics.”

The tests also “confirmed the normal operation of special equipment and the aircraft’s onboard systems under high electromagnetic radiation.”

Out With the Old, In With the New

The A-100 will replace the A-50, a 1970s-era airborne early warning and control airplane in service with both the Russian and Indian air forces. The detection distance for that aircraft is thought to be about four hundred miles for airborne targets and about one hundred and ninety miles for targets on the ground.

The Russian Air Force upgraded the A-50 in 2003, replacing analog components with digital systems. That upgrade increased processing power and processing speed. This “digitalized” A-50 variant served as a starting point for the A-100 design.

The new A-100 is based on the Ilyushin Il-76, a Soviet-era strategic and tactical heavy airlift airplane. The Il-76 is still flown by the Russian, Ukrainian, Libyan, and Indian air forces.

It is unclear how many A-100s the Russian military would like to order. However, with significantly superior detection capabilities, acquiring more of the updated airplane could be a priority. Moreover, considering Russia’s increasingly revanchist military posture today, more A-100s could be seen soon.