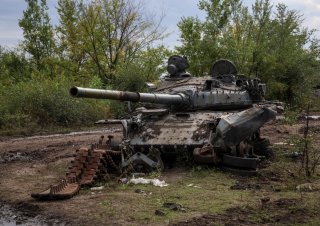 In the earliest stages of Moscow’s “special military operation” in Ukraine, Russian forces launched a direct assault on Kyiv with a special forces contingent sent to capture the city’s airport. This maneuver implied that Russia’s intent was regime change. The secondary goal of territorial expansion only seemed to replace that initial objective once it was clear to the Kremlin that its northern offensive on the outskirts of Kyiv was decisively defeated. This led Vladimir Putin to claim that the war was aimed instead at protecting the breakaway regions of eastern Ukraine. However, this is only Putin’s version of the U.S. humanitarian intervention doctrine known as “Responsibility to Protect.”

Moscow’s failure to realize its initial objectives and the unexpected cascade of setbacks it has experienced since then shows that it is not a peer competitor to the United States. Even factoring in foreign aid, such a miserable performance by what once was thought of as the world’s second strongest military power operating inside a far weaker country on its border (with limited natural and geographic defenses) casts immense doubt on Russia’s ability to threaten NATO in general. Even if Russia performs a major recovery and reverses its fortunes in Ukraine, its ability to execute a large-scale operation against another country in the near future is extremely unlikely.

This reinforces the point that it is unnecessary to admit Ukraine into NATO. Putting NATO’s permanent military posture right up to Russia’s border would be dangerously risky for an already secure alliance network. This would create a constant point of tension and sabotage future diplomacy between the great powers. A strong and neutral Ukraine, its territory and sovereignty intact, would be an ideal buffer state. Surely, Ukrainians have shown themselves to be more than capable of defending their independence. The odds of a lasting peace grow if the existential binary of NATO vs. Moscow is rejected for such an option, as the original negotiations implied before various outside powers intervened.

Meanwhile, there are many U.S. commentators that view Ukraine’s successes as a validation of their worldview. Russia’s dismal performance in a country that isn’t even a member of NATO is seen as a totalizing ideological conflict rather than a localized attempt to shore up or oppose Moscow’s waning influence in Europe. This has led to some dangerous assumptions on the part of many in Washington that it is their concept of a U.S.-centric world of the 1990s or a reboot of the Cold War paradigm that has been vindicated by the war in Ukraine.

It is in fact the opposite. Ukraine’s success against Russia’s attempt at regime change shows that under conditions of multipolarity, smaller countries can draw from a wide array of international support and overperform against larger countries. Russia is now mobilizing many of its forces meant to be left within Russia proper which has echoes of the deployment of U.S. National Guard troops to Iraq. This decision seems to be even more unpopular today in Russia than the prior example once was in the United States. Additionally, the bitter fruits of Moscow’s war of choice will likely harm Russia’s long-term interest, much as Washington’s wars of choice in the Middle East weakened the United States’ global position. The real beneficiaries of the Russo-Ukrainian War seem to be countries like Turkey, which sells weapons to Ukraine while maintaining close diplomatic ties with Russia.

The era of larger powers being able to easily topple smaller governments they do not like has come to a close due to the ability of rivals to arm, equip, train, and economically support smaller motivated countries. It is therefore imperative that the Washington foreign policy establishment learn the true lesson of the war in Ukraine: Invading a sovereign nation with the intent to perform political engineering against the will of its population is a fool’s errand that will likely result in a costly quagmire. Defending the concept of sovereignty, on the other hand, is much easier, especially for a distant naval power like the United States.

Just because Russia has embarked on this war of choice does not invalidate previous American experience with the fruitless nightmare that was the Global War on Terror. It merely shows that regime change operations as a whole are best avoided whenever possible. It is in these kinds of conflicts that great powers can find themselves humbled and weakened compared to their rival states who had the foresight to avoid such operations. In an increasingly multipolar world, the powers that show restraint towards such forms of interventionism will find themselves stronger compared to those who undertook unnecessary military operations in contested countries. The bitter lesson Moscow is presently learning is not an outlier but a trend.

Christopher Mott is an international-relations specialist and author of "The Formless Empire: A Short History of Diplomacy and Warfare in Central Asia."