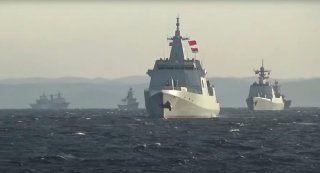 Russia and China have conducted the first-ever joint patrol in the western Pacific.

A total of ten Russian and Chinese warships are believed to have taken part in the drills, which were announced on Saturday. According to the Russian Defense Ministry, the Russian military presence in the western pacific included the Admiral Tributs and Admiral Panteleyev Udaloy-class destroyers,  Steregushchiy-class corvettes Hero of the Russian Federation Aldar Tsydenzhapov and Gromky, and the Navy tracking ship Marshal Krylov. The Chinese People’s Liberation Army Navy (PLAN) was represented by the new Type 055 guided-missile stealth destroyer Nanchang and Type 052D guided-missile destroyer Kunming, as well as the Type 054A frigates Binzhou and Liuzhou and the supply ship Dongpinghu. There is a significant degree of overlap between the ships present at these latest drills in the western pacific and those that took part in the Russian-Chinese Joint Sea 2021 exercises in the Sea of Japan earlier in October.

“The group of ships passed through the Tsugaru Strait for the first time as part of the patrol,” added the Russian Defense Ministry statement. “The tasks of the patrols were the demonstration of the Russian and Chinese state flags, maintaining of peace and stability in the Asia-Pacific region and guardianship of the subjects of maritime economic activities of the two countries.” The drills mark the first time that a joint Russian-Chinese naval force passed through the Tsugaru Strait, which is regarded as an international waterway. Japan’s Defense Ministry reportedly characterized the drills as “unusual” and said it was monitoring their movements closely. The Russian statement noted, without elaborating, that the two navies practiced joint tactical maneuvers. Whereas Joint Sea 2021 was heavily focused on anti-submarine operations, Chinese military experts suggested that future Russian-Chinese maritime drills could take place in the East China Sea and may emphasize anti-ship as well as air defense capabilities.

The exercises were hailed by Chinese state media as a challenge to the new AUKUS security partnership between the United States, UK, and Australia. “AUKUS will bring more unstable factors to the Western Pacific since the trio may have more provocative actions,” read a recent op-ed published by the Chinese state news outlet Global Times. “The U.S. is trying to rope in more countries into the Western Pacific and Indo-Pacific regions to contain its strategic competitors. This may have a negative impact on China’s maritime security.” The Russia-China drills in the western Pacific, continued the Global Times, signal the willingness of the two countries to “break the U.S. strategic blockade and military encirclement, as well as to completely crash its attempt to use AUKUS for a strategic containment… In this context, Moscow can coordinate with Beijing to counter AUKUS.”