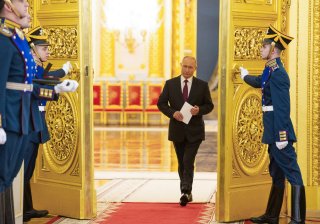 Russia’s Federal Customs Service, or FTS, announced on Thursday that it had foiled an international attempt to smuggle 500 pounds of gold, worth approximately $13 million, through Moscow’s Vnukovo International Airport, according to Russia’s state-run RT network.

The scheme, which included at least six participants from both Russia and Armenia, involved a sophisticated plan to swap luggage inside the airport. The FTS reported that three Armenians with tickets to Yerevan had entered the airport’s international terminal carrying the gold in their carry-on bags, which were not subjected to customs due to Armenia’s participation in the Eurasian Economic Union. Once inside the airport terminal, the Armenians exchanged their gold-filled suitcases with the empty bags of three Russians traveling to Dubai, a major hub for the international gold trade.

The FTS claimed that its officers had become suspicious of the Armenians after watching them struggle to carry their extremely heavy luggage through the airport. After the swap, the group was seen carrying the otherwise-identical suitcases much faster, leading the FTS to detain them. Once the Armenians were caught, customs agents searched the plane departing for the UAE, where the three Russian smugglers were also arrested.

In all, customs officials discovered seventy-one gold bars totaling 225 kilograms in their luggage, according to the FTS statement. The gold was properly marked with serial numbers, allowing Russian police to trace its origins and determine how the Armenians had acquired it. Russia’s Kommersant newspaper observed that the shipment “was not declared and did not pass customs inspection,” violating Russia’s customs laws.

Russian prosecutors later announced that they intended to charge all the men involved with three felonies, including criminal conspiracy and an attempt to smuggle “strategically important” goods out of the country. The three Armenians were identified as Artak Ayvazyan, Karen Darbinyan, and Arman Harutyunyan; a Moscow court ordered them to be jailed until September, while the three Russian citizens were released pending a trial.

Russia is the world’s second-largest producer and exporter of gold behind China, and Russian gold shipments have been a valuable lifeline for the country’s heavily-sanctioned economy since the onset of the Russian invasion of Ukraine in February, prompting the Group of Seven (G7) nations to ban them. The Kremlin has also been accused of involvement in foreign gold smuggling operations, with Western journalists claiming that the Kremlin-linked Wagner Group mercenary agency had illegally exported gold from Sudan in order to finance the Russian war effort.